WHAT WITH CONCERNS on ethical grounds, technical matters, and practical aspects, I have been skeptical of any onrush to driverless vehicle technology. However, the Automotive News weekly keeps me updated. Here are some tidbits in favor of vehicle autonomy and otherwise.

Driverless Detroit. It may seem like heresy in the Motor City, but Automotive News, June 17, 2019, reports that “Ford Expands AV Testing in Detroit.” As in other cities, Pittsburgh, Miami, Palo Alto, and Washington, D.C., this testing is on public streets and highways, not just on private proving grounds. 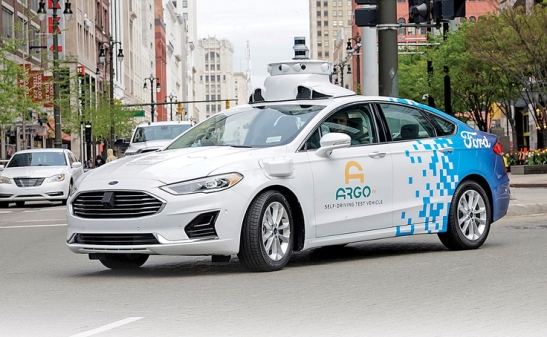 I continue to have mixed emotions in regard to all of us participating in these development programs. I’ll be particularly interested to learn how AVs handle adverse weather.

What of Snow and Ice? Because of its covering characteristics of surfaces, snow has been called the sightless person’s fog. Snow and ice also obscure lane markings, signage, and other targets of an AV’s camera and laser sensing. “Radar Finds New Place in Self-Driving Technology,” Automotive News, June 3, 2019, writes that “Weather is a prime reason so many companies run testing in the sunny confines of places like Arizona and Florida.” 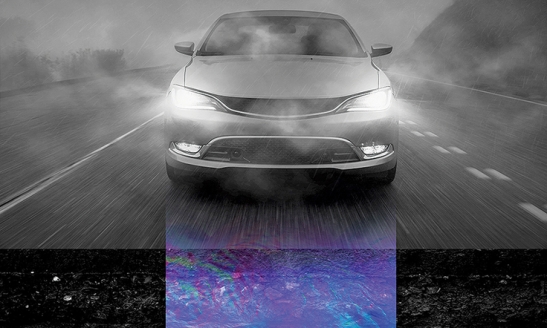 Until now, the article notes, radar has not been used as a tool for localization, only for obstruction identification in devices such as smart cruise control. “That’s changing,” Automotive News notes, “Whether it is global suppliers such as Bosch, or startups such as Lunewave and WaveSense, a recent spinoff from MIT’s Lincoln Laboratory, there’s fresh innovation being wrung from radar, a technology that first found widespread use during World War II, and was first deployed on production automobiles by supplier Delphi in 1999.”

Neither Rain, Nor Sleet, Nor… “Postal Service to Test Automated Delivery Between 2 Major Hubs” Automotive News, May 21, 2019, describes a partnership between the U.S.P.S. and autonomous truck company TuSimple: A two-week pilot project “will automate trips between distribution hubs in Dallas and Phoenix.” 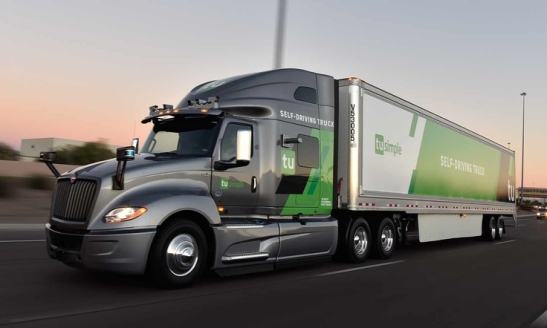 “Three of TuSimple’s big rigs will make five round trips over two weeks, hauling trailers filled with mail and examining the potential of automated hauling mainly along Interstate 10, a linchpin of freight movement in the United States.”

The article also notes the importance of “regulation-friendly states” and “weather-friendly conditions.” These trucks will continue to carry two-person crews, though TuSimple expects to launch full self-driving operations in late 2020 or 2021. 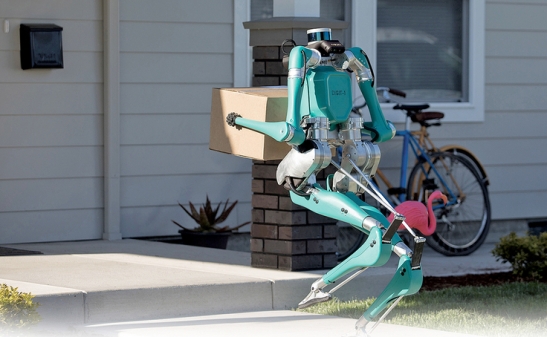 Ford teamed with Agility Robotics to develop this robot handling the last 50 feet of delivery. Image from Automotive News, May 27, 2019.

A two-legged robot named Digit, developed jointly by Agility Robotics and Ford, selects the package from the delivery vehicle, traverses steps and uneven terrain, and even reacts to being bumped without falling over.

Out of a Job? Maybe Not. Vehicle autonomy causing unemployment has already been discussed here at SimanaitisSays, as related to driverless rigs displacing workers at the Ports of Los Angeles and Long Beach.

However, “Maybe Robots Aren’t Out For Your Job,” Automotive News, May 6, 2019, suggests otherwise: “Just ask a bank teller,” the article says. 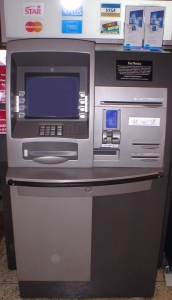 An NCR Personas 75-Series multi-function ATM in the U.S. Image from Rfc1394 at English Wikipedia.

Gary Silberg, partner with KPMG and head of the firm’s Americas automotive practice, spoke to the Automotive Press Association in Detroit. When ATMs, automated teller machines, were installed, he said, “Everyone freaked out…. What actually happened—the cost per transaction went down… and they built branch banks. There are more employees in the banks now than before.”

As a regular visitor to tellers at my bank’s supermarket branch, I can’t recall the last time I visited a traditional bank. Thus far, I’ve never used an ATM. ds