WITH JOE MILLER, THE JOKE’S ON MOTTLEY

An 18th-Century Tragedian. Joseph Miller, 1684–1738, began his acting career as Teague in Sir Robert Howard’s Committee, at Drury Lane in 1709, followed by such roles as Trinculo in Shakespeare’s The Tempest and the First Gravedigger in Hamlet. Not exactly the Richard Burton of his era, Miller was a friend of editorial cartoonist William Hogarth, and both recognized the value of good PR. 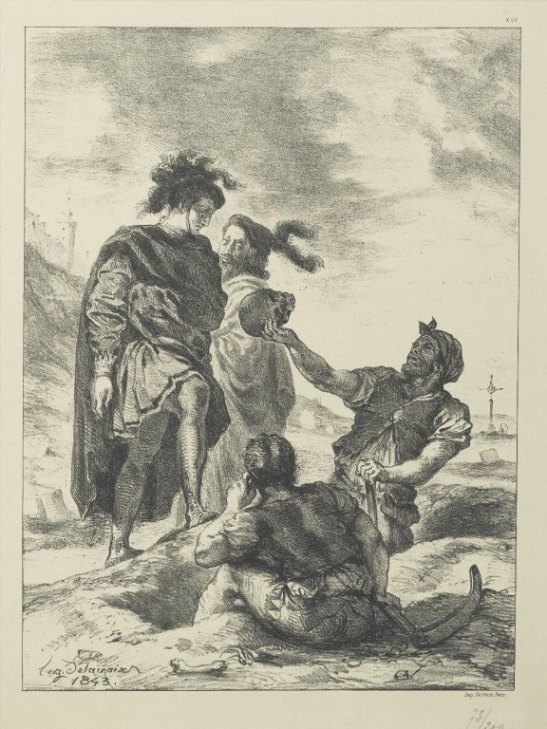 Hamlet, Horatio, and the Gravediggers, by Eugène Delacroix, c. 1843.

Hogarth designed tickets for one of Miller’s performances in 1717. The design was recycled for a Miller benefit performance in 1738, the year of his death. And in 1868, the Hogarth work was still being described as a “very valuable engraving.”

Hogarth engraving “for the benefit of Joe Miller.”

Miller frequented the Black Jack Tavern on London’s Portsmouth Street, a hangout for actors and other lowlife. According to Wikipedia, “Allegedly he was very serious in the bar and this led to an in-joke whereby all his companions ascribed all new jokes to him.”

An Author of Mixed Success. John Mottley, 1692–1750, was an only so-so clerk who then dabbled as a dramatist, biographer, and compiler of jokes. Mottley’s first play was The Imperial Captives, a tragedy produced in pseudo-classic style in 1719. A second tragedy, in both style and audience reception, came two years later.

Mottley’s comedic efforts were more successful, with titles such as The Widow Bewitched, 1730, and The Devil to Pay, or The Wives Metaphros’d, 1731.

He found his real metier, though, in publishing works under pseudonyms: As Robert Seymour, he co-edited a Survey of the Cities of London and Westminster, 1734. And, in 1739, the year after Joe Miller’s death, Mottley used the pseudonym Elijah Jenkins to publish Joe MIller’s Jests: or the Wits Vade-Mecum.

The Latin phrase Vade-Mecum means literally “go with me” and came to be a synonym for “handy reference book.”

The book’s subtitle was in keeping with literary style of the era: “Being A Collection of the moſt Brilliant JESTS; the Politeſt REPARTEES, the moſt Elegant BONS MOTS; and the moſt pleaſant ſhort Stories in the English Language.”

By the way, those “ſ’s” are actually use of the medial s, also known as the long s. It’s traceable to the Roman cursive s, which survived into Old English, and remained in English orthography until the 1800s. As in “the pursuit of Happineſs,” there were rules about which s was used.

Image from University of Virginia.

Jest Books. The oldest known jest books date from the first millennium. The genre flourished during Elizabethan times. Wikipedia writes that “Playbooks and jestbooks were treated as forms of light entertainment, with jokes from one being recycled in the other, and vice versa.”

Mottley aka Jenkins played on the in-joke of Joe Miller stories, even though only three of the book’s witticisms are actually Miller-related. The first edition of Joe Miller’s Jests was a pamphlet of 247 numbered jokes. Three editions were printed the first year.

Joke 234. “A famous teacher of Arithmetick had long been married without being able to get his Wife with Child. One said to her, ‘Madam, your Husband is an excellent Arithmetician.’ ‘Yes,’ replies she, ‘only he can’t multiply.’ ”

To gauge the longevity of this joke, see “What’s a Slide Rule, Grandpa?” here at SimanaitisSays.

Miller is referenced in James Joyce’s Ulysses, 1922: The last line of a limerick there is “I can’t see the Joe Miller. Can you?”

CBS Radio Workshop, 1956. Dr. Frank C. Baxter, 1896–1982, was Professor of English at the University of Southern California. He also was the moderator of CBS Radio Workshop No. 41, “The Joe Miller Joke Book,” a 1956 documentary on humor. 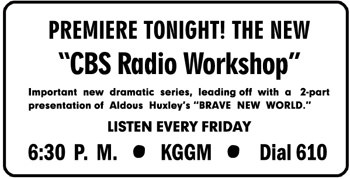 Miller and Mottley. All these years later, the book Joe Miller’s Book of Jests

is still celebrated, even in Kindle edition. By contrast, Mottley’s etymological reference is a dead end: Merriam-Webster defines “motley” as “variegated in color,” “made up of many different people or things.” Sort of like Mottley’s Joe Miller’s Jests.

However, MW says, “Motley made its debut as an English adjective in the 14th century, but etymologists aren’t completely sure where it came from. Many think it probably derived from the Middle English mot, meaning “mote” or “speck.” This, of course, was long before Mottley came along. ds