RACING LINKS TO R.E. OLDS, THE SULZER BROTHERS, AND A COMMER KNOCKER PART 1

SCORES OF BRITISH bus and lorry drivers have been propelled by a highly unorthodox engine with a racing link. Based on a 1934 patent of Ransom E. Olds, or maybe an earlier Sulzer Brothers’ one, the Commer TS3 Knocker had three horizontal cylinders, each containing two pistons reciprocating opposite each other. Odd though it was, this 200-cu.-in. (3.26-liter) Roots-blown diesel engine was used in trucks and buses in 1950s and 1960s Britain. A racing link came in the engine’s powering the custom-built one-off transporter for Ecurie Ecosse, the Scottish motor sports team famed for Le Mans victories in 1956 and 1957. Here, in Parts 1 and 2 today and tomorrow, are tidbits on the Commer Knocker, its origins, and racing team career.

The Olds 1934 Patent. Ransom Eli Olds stayed with his namesake company, founded in 1897, for less than a decade. He established Reo in 1904 and saw it flourish into a manufacturer of cars, trucks, and even buses. These last two got him interested in diesel combustion.

In 1934, Olds filed a U.S. patent for a lightweight two-stroke diesel particularly unorthodox in its layout.

The opposed-piston/single-crankshaft two-stroke engine patented by Ransom E. Olds in 1934.

In each cylinder, a pair of pistons reciprocated toward each other on the compression stroke and away from each other on the power stroke. Each piston was linked to a central crankshaft located below via a rocker arm/con rod assembly.

Being a valveless two-stroke engine, its intake and exhaust were achieved by the pistons’ exposing ports in the cylinder. A blower promoted scavenging, forcing out the spent combustion while encouraging a fresh charge of air into the pistons’ shared combustion chamber. Being a diesel, the injected fuel was then ignited by the extreme temperature of the compressed charge. 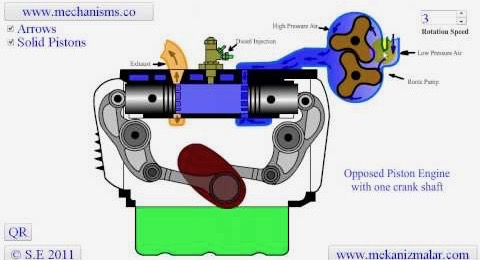 This animation from mechanisms.com shows the engine’s operation.

The Engine’s Swiss Origin. According to Daniel Strohl in Hemmings Daily, January 9, 2014, the idea of an opposed-piston/single-crankshaft diesel “apparently originated with Sulzer Brothers, a Swiss diesel engine manufacturer.” He also notes that Sulzer seems to have licensed its ZG9 engine design to Hill Diesel, a U.S. company bought by Olds in 1929. Strohl writes, “The same Sulzer ZG9 also apparently provided inspiration (whether licensed or not, we have yet to determine) to British firm Tilling-Stevens, which designed its own opposed-piston diesel that Rootes put into production as the TS-3, commonly known as the ‘Knocker,’ powering Commer trucks during the 1950s and 1960s.”

Commer’s TS3. According to Wikipedia, “It is often thought that ‘TS’ in the engine’s name derives from its Tilling-Stevens origin… but this is incorrect. It stands for Two-Stroke. Development of the engine started … some four years before Rootes acquired Tilling-Stevens.”

The TS3 as fitted to Commer trucks and buses produced 105 hp at 2400 rpm and an impressive 270 lb.-ft. of torque at 1200 rpm. The engine’s flat-three configuration permitted its being mounted beneath the floor in a cab-forward layout.

The Knocker nickname came not from diesel combustion nor the exhaust, but rather from timing gear clatter of its scavenging blower in export TS3s. Wikipedia writes “… when the timing gear became worn over time, the export models produced that wonderful ‘knocker, knocker, knocker’ sound at idle that is so well known in New Zealand and Australia but not present in the U.K. models.”

3 comments on “RACING LINKS TO R.E. OLDS, THE SULZER BROTHERS, AND A COMMER KNOCKER PART 1”