THERE’S IRONY yet comfort in learning that the great white shark, Carcharodon cacharias, possesses characteristics that may prove beneficial to humans. According to BBC News, February 19, 2019, the understanding of great white DNA could help cure human cancer and age-related illnesses.

Full details are offered in ”Comparative Transcriptomics of Elasmobranches and Teleosts Highlight Important Processes in Adaptive Immunity and Regional Endothermy,” by Nicholas J. Marra et al, published in BMC Geonomics, 2017 18:87. Briefly, as reported in Save Our Seas Magazine, June 2017, “Sharks May Have the Edge in Healing.”

The great white shark is notable for its size. Females may reach 20 ft. in length and weight 4200 lb. Males, about 13 ft. Image by Pterantula (Terry Goss).

The Shark: Ancient, Formidable, Complex. Evidence of shark-like creatures dates from 450 million years ago. The earliest known fossils of the great white shark are about 16 million years old.

The great white’s Carchardon moniker is from the Greek, “sharp/jagged tooth,” foremost in people’s image of this most formidable of sharks. In fact, the same dental characteristic gave the name to a dinosaur, Carcharodontosaurus.

The great white resides atop its food chain. For example, there’s an area of the Pacific Ocean halfway between Baja California Peninsula and Hawaii known as the White Shark Café.

Genome Stability a Great White Plus. The BBC article notes, “Unstable genes in humans are what make us vulnerable to age-related diseases such as cancer.” The article quotes Dr. Mahmood Shivji, director, SOSF Shark Research Centre: “Now we find that nature has developed clever strategies to maintain the stability of genomes in these large-bodied, long-lived sharks.” 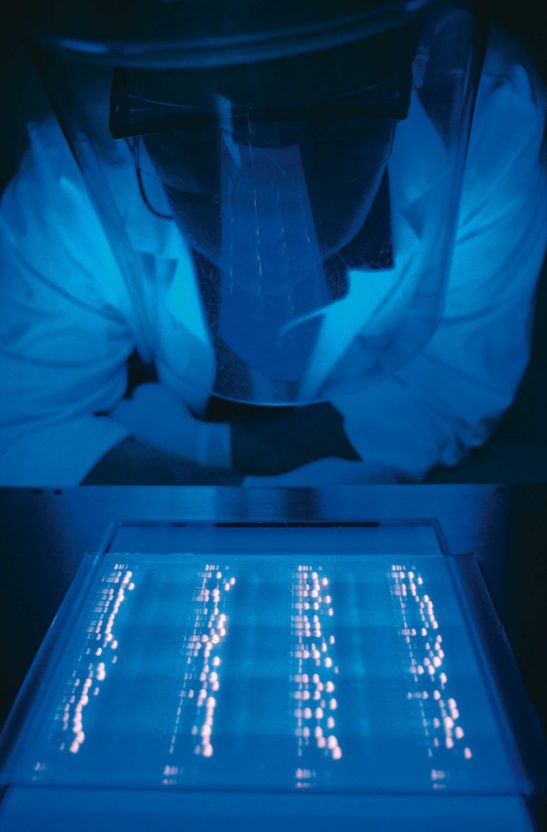 A researcher examines computer simulations of DNA. Image by Karen Kasmauski/National Geographic Creative from Save Our Seas Magazine, June 2017.

Notes BBC: “Shark DNA is one-and-a-half times bigger than human DNA, meaning there are things coded into the animals that, at the moment, humans can’t do. And scientists hope to unlock those secrets and use them to treat problems that DNA is already solving in sharks.”

Sharks, for example, have higher resistance to cancer than humans. They can reside in bacteria-filled water without infection. Also, because of a shark’s ability to recover quickly from serious injuries, research could lead to enhanced wound healing and blood clotting in humans.

“The immune system of sharks and rays,” Dr. Shivji said, “has been battle-tested and evolved over hundreds of millions of years. We’ve just scratched the surface in terms of learning what these ancient animals can teach us, as well as possibly provide us in terms of direct biomedical benefits.” ds

2 comments on “GREAT WHITE SHARKS HAVE GREAT DNA TOO”