So whoever is Phyl Coe?

Think of Phyl Coe as radio’s Nancy Drew. And, as I learned from old-time radio sources, Phyl’s bbf Tom Taylor was later to star as a guy wearing a cape and leaping tall buildings. Also, Phyl’s name broadly hinted at her sponsor, Philco, the pioneer radio giant that invested a bundle in her career.

Nancy had boyfriend Ned Nickerson. Phyl’s pal Thomas Taylor is described as her “admirer,” though he seems to spend a lot of time saying “Yes, dear” after she says, “Quiet, Tom.”

On Thirties Air Travel. Such repartee arises in Phyl and Tom’s cross-country overnight flight to New York City. I’d conjecture it was aboard a Curtiss-Wright Condor, as this craft was known for its sleeping accommodations. 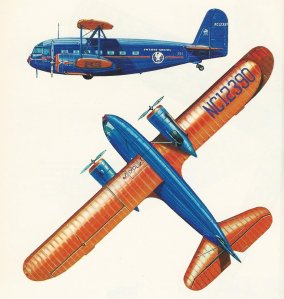 Tom says, “Wanna go outside and watch her land, Phyl?” “I don’t think so, Tom.” To which Tom responds, “OK, darling, no other woman but you could keep me from watching an airplane land… I think I’ll just sit here and gaze at you.”

Later, another passenger quips, “I guess the three of us are going to be sleeping companions, eh?” Tom says, “Not exactly, but we’re all going on this same plane, if that’s what you mean.” (Everyone chuckles.) 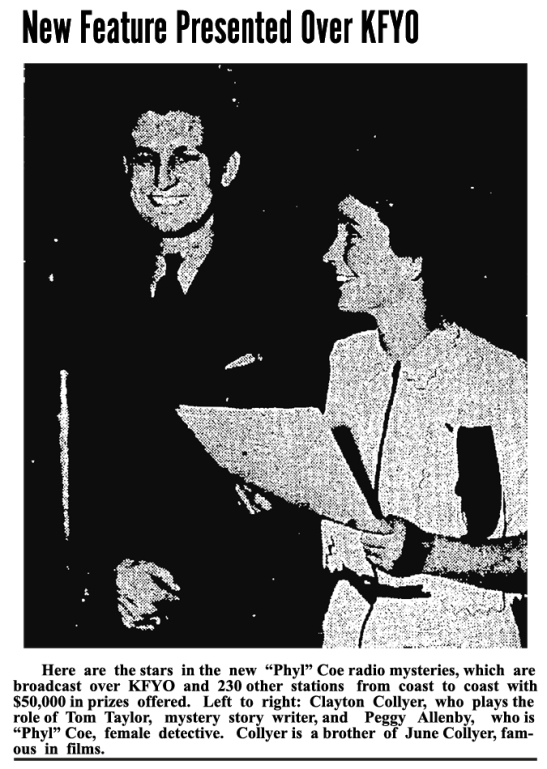 Image from Digital Deli Too.

The Superman Connection. Phyl Coe was portrayed by Peggy Allenby, who later played Mattie Lane Grimsley on TV’s Edge of Night soap opera. Tom Taylor was portrayed by Clayton “Bud” Collyer. From 1940 to 1951, Bud starred as radio’s Clark Kent and, voiced down a tone, Superman. He also later hosted TV game shows Beat the Clock and To Tell the Truth.

Tomorrow in Part 2, we’ll see how Philco marketed Phyl and her pal. ds