THERE IS timeless beauty surrounding the lakes of northern Italy. As identified in my 1927 Cook’s Traveller’s Handbook Northern & Central Italy, they are from west to east Orta, Maggiore, Varese, Lugano (the larger part of which is in Switzerland), Como, Iseo and Garda.

Here are the northern Italian lakes from satellite view.

The southernmost leg of Lago di Como is a quick 30 minutes of autostrada from Milan. There, the town of Como is the birthplace of electrician and philosopher Alessandro Volta, 1745-1827, whose statue resides in the Piazza Volta.

Just north of Como, with the lake on the right, lies Cernobbio and one of the most elegant settings imaginable, the Villa d’Este. The Cardinal Tolomeo Gallio had this place built in 1568, though its name derives from a decidedly irreligious Carolina Amelia Elisabeth of Brunswick-Wolfenbüttel. You may know her as Princess Caroline, wife of England’s eventual George IV.

These two were ill-suited for each other, if you get the drift of my meaning, and Caroline left George in 1814, eventually discovering Lago di Como. The old Gallio digs were up for sale, and you’ll never guess her real estate agent—Alessandro Volta.

Caroline turned the place into a salon for the finest wits, poets, roués and sycophants of her time. One wrote that she was “a fair blossom of the race of Este.” In fact, she was 46 and squat.

The Este connection is a fascinating one as well. Guelfo d’Este lived in the 11th Century and might have sired both the house of Brunswick (Caroline’s folks) and that of Hanover (George’s). This sounds a lot like Wagner’s Ring Cycle, so it’s probably true.

These days, Villa d’Este hosts a wonderful Concorso d’Eleganza. The 2013 event is later this month, May 24-26.

What was beautiful in the past remains a thing of beauty today. The illustration above is from Historical Notes on Villa d’Este, Cernobbio, 1938. 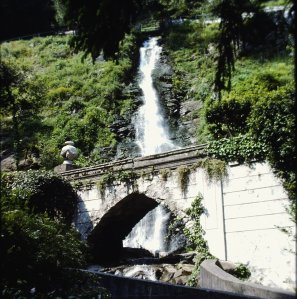 Whereas Lago di Como resonates with the rococo, our next northern Italian destination, Lago di Garda, has a feel of the Roaring Twenties. ds

This entry was posted on May 6, 2013 by simanaitissays in Just Trippin' and tagged Lago di Como, northern Italian lakes, Villa d'Este.