INNES IRELAND was an extremely talented racecar driver—giving Team Lotus its first F1 victory in 1961—a wonderful raconteur and writer, and a dear friend. Stories galore come to mind. I offer here a song, a poem and a toast, all taught to wife Dottie and me by Innes.

Innes had already been writing for the British Autocar magazine when R&T took him on as a correspondent sharing Grand Prix coverage with Rob Walker (www.wp.me/p2ETap-jU). The first day Innes showed up at R&T’s Newport Beach, California, offices in the early 1980s, he charmed one and all with his larger-than-life personality and wonderful sense of humor.

Before long, he was teaching us all the outrageous lyrics of “Dear Mrs. Murphy,” which he sang in quite the presentable baritone.

“Dear Mrs. Murphy/And your five lovely daughters/Thank you for having me/And being oh so kind./I’ve got pains in my back/My knees have turned to jelly/My dork is getting shorter/And I think I’m going blind.”

This portrait by Leo Bestgen (www.wp.me/p2ETap-rO) suggests another side of Innes, his intensely competitive spirit.

Succinctly, Innes was a race driver—and intensely competitive. But he was decidedly of an era when race driving was an entertainment, not a business.

All Arms and Elbows, by Innes Ireland, with foreward by Jack Brabham, OBE, Transport Bookman Publications, 1994. Both www.amazon.com and www.abebooks.com list it in this and other editions. First editions published in 1967 are highly collectible.

In his book, All Arms and Elbows, Innes describes the deal when he joined Lotus in 1959: “In the first year, I would receive 25 percent of the starting money, I think 33 1/3 percent of bonus money and 50 percent of prize money (actually, 45 percent, since one traditionally gave the mechanics 5 percent).”

Innes’s book certainly describes what it was like to be a top-ranked driver competing with the likes of Stirling Moss (Innes’s good friend), Graham Hill, Dan Gurney and Jim Clark. Innes’s heroic effort in 1960 pushing his Lotus up the hill at Monaco—and then through the tunnel and completing the rest of a lap—is memorable.

Sideways to Sydney, by Innes Ireland, William Morrow & Co., 1971. Both www.amazon.com and www.abebooks.com list it.

Both Arms and Elbows and Sideways to Sydney share Innes’s zany side. The latter describes his codrive of a Mercedes-Benz sedan in the 1968 London-to-Sydney Marathon sponsored by London’s Daily Express newspaper. Seven days—and 7500 miles—from London to Bombay (today’s Mumbai); getting stoned along the way by political agitators in Pakistan; spending a night in a Karachi jail; earning the Private Entrant Award in Bombay. Then on to Australia, and 3500 more miles in 3 1/2 days.

Innes recounted this adventure with a gleam in his eye, as he shared a whimsical bit of his own poetry, “Ode to a Karachi Jail.” 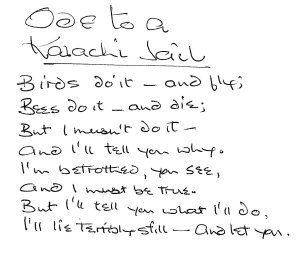 “Ode to a Karachi Jail,” in Innes’s own hand.

Raised a good Scotsman (though, indeed, he was born in England), Innes liked his Scotch whisky (no “e,” you’ll note). Wife Dottie, he and I enjoyed plenty of Famous Grouse and occasionally celebrated with a single malt.

A pronouncing guide, in Innes’s own hand.

Innes, rest his soul, enriched our lives in many ways. ds

3 comments on “POETRY FROM INNES”

This entry was posted on May 7, 2013 by simanaitissays in Classic Bits and tagged "Ode to a Karachi Jail", Innes Ireland.