WHEN WILL this ethanol fuel nonsense cease? We already have 10-percent ethanol “extending” our gasoline; that is, the gasoline is really E10. And then there’s E85 (85-percent ethanol/15-percent gasoline). It can be used only in Flex-Fuel vehicles, but most Flex-Fuel drivers still opt for gasoline, er… E10.

E85’s 30-percent hit in mpg and limited availability mean that most Flex-Fuel vehicles spend much of their time on E10.

Ethanol producers—caught with a glut of the stuff—have been pushing for E15, despite objections of automakers, marine and small engine manufacturers, even the Grocery Manufacturers of America, caught at the forefront of the food-vs.-fuel quandary. See www.wp.me/p2ETap-ET.

According to The New York Times, May 3, 2013, http://goo.gl/hCEDh, laid deep within the EPA’s 938-page proposal to cut sulfur in gasoline, there’s a request for comments about tripling the amount of ethanol in gasoline from today’s E10 to E30.

There are rational reasons for reducing sulfur (see www.wp.me/p2ETap-Xn). But is there any sense in E30, other than kowtowing to the ethanol lobby?

The principal argument given is one of octane, but even here there’s deception going on. Indeed, ethanol has a high octane. However, there are three distinct measures of this resistance to engine-damaging knock. Motor and Research Octane are the technical metrics, determined in lab testing. AKI (anti-knock index) is the average of these two, the “pump” octane on service station labels.

Ethanol proponents boast about its octane of 108.6, considerably higher than Premium E10’s 92-93. But this is mixing octane metrics. The E10 value is AKI or pump octane. The 108.6 is ethanol’s Research Octane; its Motor Octane is 89.7.

Were it posted on an imaginary E100 pump, E100’s octane would be 99.2. And, by the way, there are no takers for E100 as a road fuel because its cold-start characteristics are unacceptable at less than around 50 degrees Fahrenheit. This is the primary reason for E85’s 15-percent dose of gasoline. 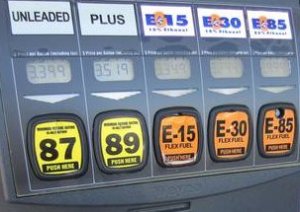 Just how many buttons do we need?

If an engine is designed with higher compression ratio, or has a turbo- or supercharger calibrated to higher boost, added octane can be exploited for enhanced power—and maybe translated into better fuel economy. Otherwise, this additional knock resistance is wasted.

What’s worse, ethanol contains only 67 percent of the energy of gasoline. This explains the gasoline/E85 differences cited in the EPA Fuel Economy Guide mpg listings for Flex-Fuel vehicles, the dual-fuel nature of which demands compromises of each fuel usage.

To exploit any potential benefit of E30—other than to the ethanol suppliers—vehicles would have to be dedicated to this fuel. And, even then, it’s not clear that the octane kick would overcome the energy shortfall.

Previous work has not been encouraging in this regard. For example, according to its press information, the 2007 Volvo XC60 Concept was optimized to run on E85. Indeed, the Concept’s 3.2-liter inline-6 produced 265 bhp (compared with the current XC60’s 240). The Concept’s fuel economy was cited as 19.2 mpg (albeit with no particular test cycle cited). The 2014 EPA Fuel Economy Guide lists the (gasoline, non-Flex-Fuel) XC60’s figures at 19 City/25 Highway/21 Combined.

As noted at the beginning, when will this ethanol nonsense cease? ds

This entry was posted on May 5, 2013 by simanaitissays in Driving it Today and tagged E30, ethanol motor fuel.