ITALIAN COACHBUILDER CASTANGA made magic art combining elegance with Alfa Romeo brio. This 1933 6C 1750 is the third Castanga-bodied Alfa featured here at SimanaitisSays. I described the 1934 2.3-Litre Castanga Alfa as having “brio with elegance.” In the same article, the 1914 Siluro Ricotti hid a conventional A.L.F.A. chassis encased within Castanga-fabricated torpedo bodywork. 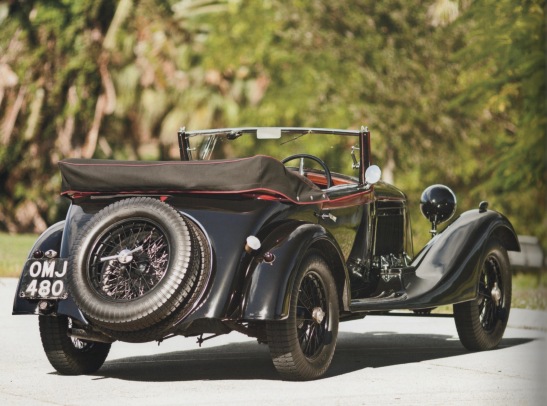 Gooding writes that the car “is a very early 6th Series Gran Sport, of which only 44 examples were built…. With its elegant proportions, dual rear-mounted spares and long, sweeping fender line, this Drop Head Coupe has much more dramatic styling than many of the firm’s earlier designs for the 6C chassis.”

Gooding continues, “Discovered in and imported from the occupied British Zone following WWII, it is believed that the car was delivered new to a customer in Germany. Unlike many high-end automobiles, this 1750 was fortunate to survive the duration of the war, but not without its own battle scar—a somewhat comical hole in the middle of the passenger door, which was caused by artillery fire.”

Evidently the passenger door had been put right by the time of this photo.

Matching Numbers. The car’s provenance is enhanced by its having an identical engine and chassis number: 121215033. The 6C 1750 nomenclature identifies its engine’s six cylinders (actually displacing 1752 cc). The base engine (if such heresy of terminology will be excused) had a single overhead camshaft. Super Sport and Gran Sport versions had double overhead camshafts.This particular Gran Sport was also fitted with the optional Roots-type supercharger, giving it 85 hp at 4500 rpm. Supercharged 6C 1750 Gran Sports had a top speed approaching 100 mph.

The Root-type supercharger, driven from the front of the engine, features finned ducting to dissipate heat of its compressed charge.

This car’s front suspension is independent with torsion bars and unequal-length wishbones. A live rear axle is suspended on trailing links with a one-piece torsion bar. The model was known for its supple suspension, capable of handling indifferent roads of the era, though it’s considered stiff by modern standards.

The car’s manual gearbox has four speeds actuated by a spindly lever. Like other sporty cars of the era, its accelerator is positioned between brake and clutch; this, to facilitate heel-and-toe double-clutch downshifting. The finned-drum brakes are actuated mechanically.

The Alfa’s key confirms a legend of simplicity in firing up an Italian high-performance car.

The Gooding catalog notes, “Included with the sale is an impressive file that consists of restoration documents, a copy of the original UK logbook, and a rare English-language operation manual for the 6C 1750 Gran Sport model.”

Like all Castanga-bodied Alfas, the car is a sweetheart with real brio. ds