THE OPERA AIN’T OVER TILL … WAIT! IT IS OVER!

IMAGINE: TEN OPERAS performed in the time of a single Wagner Götterdämmerung! Seth Colter Walls offered an example of this in “A Grand History of Small Operas,” The New York Times, June 12, 2020.

Walls gives mini-summaries, with performance links, of the ten operas. They range from Claudio Monteverdi’s Il Combattimento di Tancredi e Clorinda, 1624, to Unsuk Chin’s Le Silence des Sirènes, 2014. I highly recommend Walls’ article and its attached links. Here are tidbits on three of the operas he cites, in addition to a favorite of mine that made a SimanaitisSays appearance at “Opera and Aviation.”

Monteverdi’s Operatic Innovation. Even though it’s set in the First Crusade, 1096–1099, Monteverdi’s Il Combattimento di Tancredi e Clorinda is, as they say, as timely as today’s headlines. Crusader Tancredi falls in love with Muslim Clorinda. Their tale is a sad one. Disguised as a Saracen warrior, Clorinda is killed by, you guessed it, Tancredi. As she dies in his arms, she begs for Baptism.

Claudio Monteverdi, 1567–1643, was an opera pioneer. What’s more, according to Wikipedia, his Il Combattimento “contains one of the earliest known uses of pizzicato in Baroque music,” in which players pluck the strings rather than bow them.

Trouble in Tahiti and in a Marriage. As described in Wikipedia, Leonard Bernstein’s intimate opera Trouble in Tahiti is the story of “desperately unhappy, though married people, lonely, longing for love, and unable to communicate.” Sadly enough, he based its two characters on his parents Sam and Jennie, her name changed to a more singable “Dinah” (one of Bernstein’s grandmothers).

Video: The Psappha Ensemble performed this 46-minute Trouble in Tahiti on March 18, 2010.

First performed June 12, 1952, on the campus of Brandeis University, the opera was broadcast on television in November 1952 by NBC Opera Theatre. Its lyricism is characteristically Bernstein. Particularly moving is Dinah’s aria “I was standing in a garden” (at around 12:00 on the video); she’s at her psychiatrist at the time.

Joyce’s Ulysses Mixes It Up With Homeric Sirens. Unsuk Chin’s Le Silence des Sirènes had its debut on August 23, 2014, at the Konsertsaal, Luzern. The Boosey & Hawkes website offered press quotes: “… a dazzling reflection on Homer’s formidable femme fatales… Chin’s new work is visceral, fast-paced, and thrilling. It is written for arch-siren Barbara Hannigan in mind, and she could easily wreck a fleet of ships if she so desired.”

Another reviewer noted that the piece begins with chants of Homeric text and then evolves into “James Joyce’s fragmented verbal fugue, sparkling like points of light on water.”

One of the YouTube commenters mentions that Marisol Montalvo, a Puerto Rican singer from New York, was first runner-up for Miss America in 1992. I believe she too could launch (or sink) a thousand ships.

Extremely Short, Extremely Moving. De Wereld Draait Door, The World Turns Through was a Dutch television show that ran for 15 seasons ending on March 27, 2020. On February 15, 2016, it presented Martijn Sanders’ one-minute opera Vlucht MH370, Flight MH370, with Nora Fischer singing the role of an Air Traffic Controller interacting, only briefly, with the pilot of the ill-fated Malaysian Flight 370. 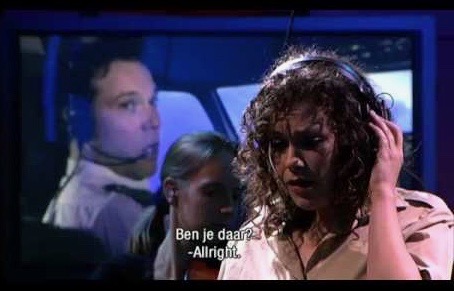 “MH-370,” she sings, calmly at first, “why the westward turn?” In the next 30 seconds she grows increasingly concerned. “Are you there?” The captain responds, “All right.”

Then, “Are you there?” followed by “All right, good night.”