THANKS, MARIE, FOR THE TINS

BACK WHEN I made my unorthodox attempt at the Aussie HSP (Halal Snack Pack), I cooked it in a recycled Marie Callender’s pie tin. Well, wouldn’t you know, Rukmini Iyer has written a series of “Roasting Tin” cookbooks, one of which I’ve recently added to my culinary shelves. 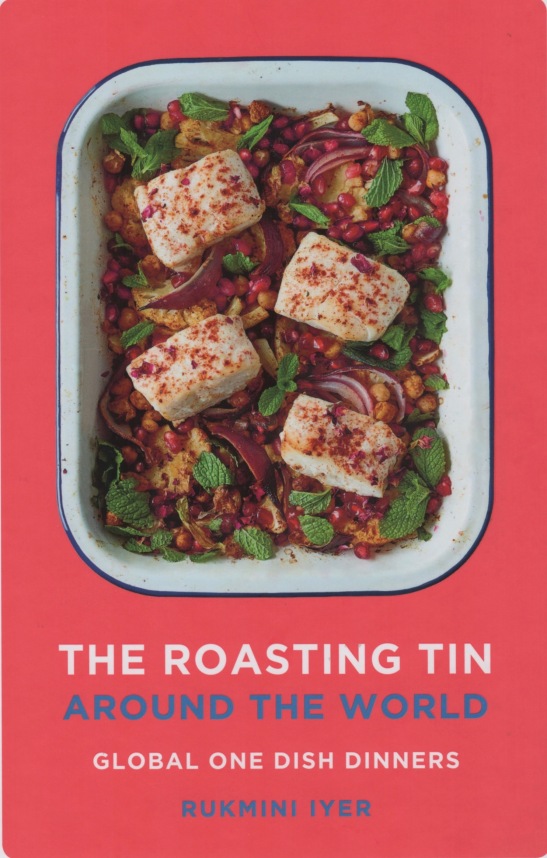 Roasting Tin Around The World: Global One Dish Dinners,

Here are tidbits, along with three recipes, gleaned from Iyer’s The Roasting Tin Around the World: Global One Dish Dinners. I’ve already tried this first one, and it’s a “make-again.” Iyer says, “Add some freshly chopped red chili if you like for extra heat.” I jazz up my helpings with Tabasco Sauce.

Rukmini Iyer notes that she grew up in Cambridge, England, “with the best of three food cultures, Bengali and South Indian food from her parents’ Indian heritage, along with classic 80s mac & cheese, sponge puddings, and cheese and pineapple on sticks.”

“This dish,” Iyer says, “is very similar in taste to a classic South Indian avial.” Jackfruit is no stranger to SimanaitisSays.

Iyer initially considered a law career, but realized she “spent all day thinking about food, all evening cooking, and most of her law lectures or time in the office scribbling down ideas for new dishes in the margins of her notebook….”

Cookery school and a summer at a Michelin-starred restaurant followed. As Iyer’s professional cooking became more complex, she found her home cooking “grew simpler, often just in a roasting tin….” 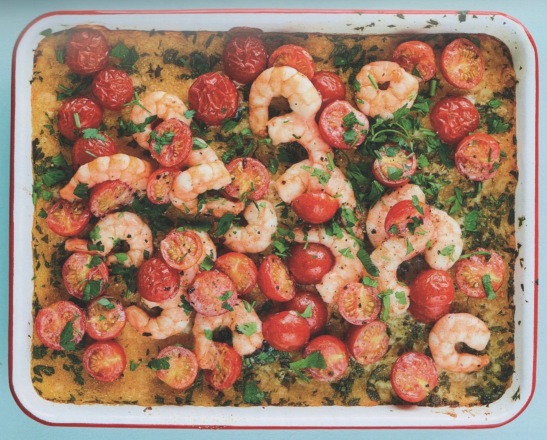 Iyer says, “Polenta is easier to buy than the slightly coarser cornmeal used for grits, so I have substituted it here for ease.” For more on authentic grits, see this entertaining episode from My Cousin Vinny.

Iyer’s bio notes, “When not working with food, she can usually be found walking her beautiful border collie Pepper by the riverside in East London, entertaining at home, or filling her balcony and flat with more plants than they can hold. Rukmini runs an occasional series of supper-clubs for charities including Oxfam and Women’s Aid.”

Above, our Roasted Sweet Potatoes with Feta & Spring Onions; my peanuts were added later. Below, our Baked Polenta (Trader Joe’s) with Prawns.

She also inspired me in assembling tasty dinners in recycled Marie Callender’s pie tins. (By the way, the pies were delicious.) ds