THANKS, CHRISTO, FOR GIVING US PLEASURE

ART GIVES PLEASURE in many ways. It can illuminate; it can provoke. It can be ephemeral; it can be timeless. All of the above describe the artistic endeavors of Christo. Here are tidbits about this artist’s unorthodox art installations, together with tales of our enjoying them.

Christo Vladimirov Javacheff, known by only his first name in his art years, was Bulgarian-born in 1935. He died in New York City on May 31, 2020, at age 84. For many years, Christo art installations were co-productions with his wife Jeanne-Claude, who also used only her given name. Jeanne-Claude née Denat de Guillebon predeceased Christo in 2009, at age 74.

Art of the Outdoors. As noted by Wikipedia, the works of Christo and Jeanne-Claude were “typically large, visually impressive, and controversial, often taking years and sometimes decades of careful preparation.” Artistic and technical aspects were only part of this; so were political negotiation, public persuasion, government permitting, and environmental approval. 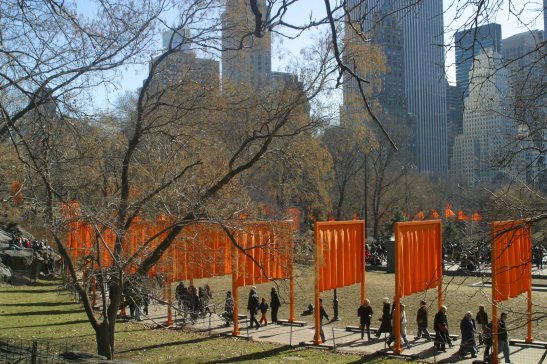 Self-financed Art. Unlike many artists, Christo and Jeanne-Claude refused grants, scholarships, donations, or public money. Instead, they financed their projects through sale of their studies’ drawings, collages, scale models, lithographs, and ephemera.

Wrapping as Art. As described at christojeanneclaude.net, wrapping “challenges the viewer to reappraise the objects beneath” and the space in which they exist.

Package on a Table, 1961, is an early Christo wrapping. More elaborate wrappings include Bern, Switzerland’s Wrapped Kunsthalle, 1968, the first fully wrapped building; and Berlin’s The Wrapped Reichstag, 1995, 24 years in the making. 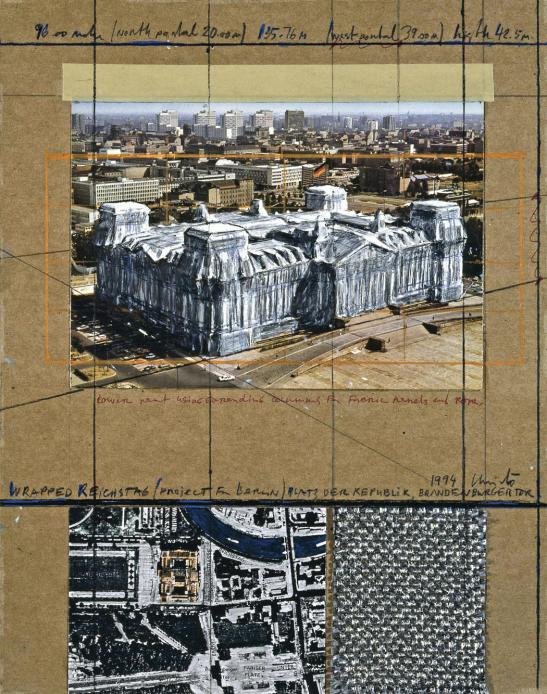 L’Arc de Triomphe, Wrapped, in Progress. Planned for 2021, wrapping this Paris landmark in silver-blue fabric has been delayed, first in 2019 for a charming reason: an on-site nesting of kestral falcons. Then came the Covid-19 pandemic. It was announced on the day of Christo’s death, May 31, 2020, that, according to his wishes, the project would be continued.

The Umbrellas Japan-USA. Back in 1991, a Christo and Jeanne-Claude project of seven years brought arrays of 3100 umbrellas to the Prefecture of Ibaraki, Japan, and to Southern California. As described in christojeanneclaude.net, “This Japan-USA temporary work of art reflected the similarities and differences in the ways of life and the use of land in two inland valleys, one 12 miles (19 kilometers) long in Japan, and the other 18 miles (29 kilometers) in the USA.”

Personal Experiences. I was in Japan for the 1991 Grand Prix at Suzuka Circuit, October 20, followed by press days for the Tokyo Motor Show, which ran from October 25 through November 8. Following my usual practice, I borrowed a car for my visit and included a few days of what I used to call “early retirement” after the work responsibilities.

Denise McCluggage, rest her dear soul, accompanied me on a half-day adventure to Ibaraki, about 75 miles north of Tokyo, to see the umbrellas along Route 349 and the Sato River. As noted by Christo and Jeanne-Claude, removal of the temporary installation began on October 27, the land was restored to its original condition, and umbrellas were taken apart with most elements recycled.

Denise and I each bought a swatch of the blue fabric. 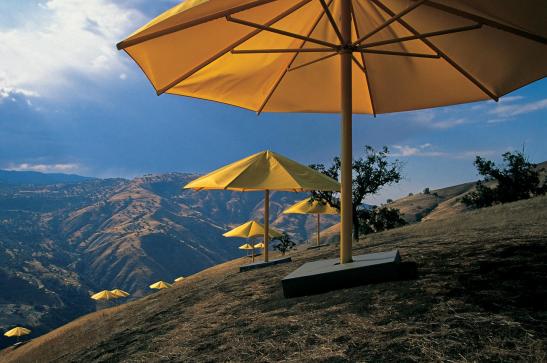 Thanks, Christo and Jeanne-Claude, for your art, the adventures, and the memories. ds

One comment on “THANKS, CHRISTO, FOR GIVING US PLEASURE”