Will the Real H.S.P. Please Identify Itself. The Dutch fast-food kapsalon was mentioned yesterday: “…fries covered with cheese, salad, and shawarma or doner kebab, consumed with large amounts of garlic sauce or chili sauce.”

“Ya Low-Country drongo! Leave out the cheese and green veggies, add Barbie sauce, and you’ve got fair dinkum H.S.P.”

Chips (fries to us Yanks) are topped with halal lamb, beef, or chicken, followed by a choice of sauces. This Halal Snack Pack is being prepared at Smith Kebabs in Collingwood, Melbourne. Image by Kristoffer Paulsen from The New York Times, May 7, 2020.

As described in Besha Rodell’s Celebrating the Great Australian Tradition of Meat in a Box,” The New York Times, May 7, the H stands for Halal. This is Arabic for “permissible or lawful,” sort of, you’ll excuse the term, Islamic kosher. Though the lamb, beef, or chicken strips in H.S.P. are traditionally halal, now perhaps only the name remains.

Wits might suggest the S is for Styrofoam™, the snack’s classic takeaway container, though cardboard suffices these days. And, as Rodell says, when the order taker says, “You want all the sauces?,” the correct answer is “Yes, please, with extra chile.” 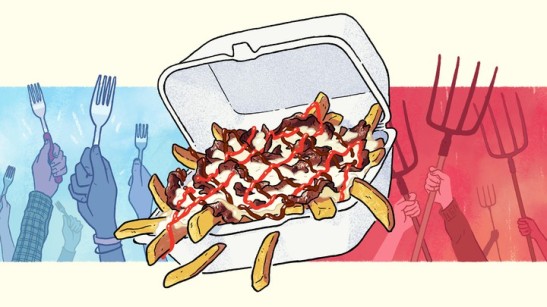 The white sauce is creamy garlic. The red is probably the tart chili. The dark red may be the barbeque. This and the following images by Julian Callos in The Atlantic, May 2020.

Australian Liberal Values and Tolerance. In The Atlantic, May 2017, Isabella Kwai wrote about “Big in Australia: Snacktivism.” In particular, the Ozzie political spectrum includes Sam Dastyari, a young liberal senator of Muslim heritage, and Pauline Hanson, a leader of One Nation, a vehemently anti-immigration party.

And, yes, Pauline Hanson is a redhead.

Isabella Kwai wrote that Dastyari “playfully extended an olive branch to Pauline Hanson… inviting her to celebrate over a Halal Snack Pack.” She was not amused. 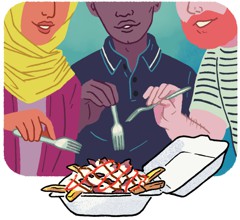 On the other hand, Kwai wrote that Dastyari’s “faith in his fellow Australians was soon redeemed.” She quoted Dastyari: “I did not realize there was a place where someone like me would belong. This was before I knew about the Halal Snack Pack Appreciation Society—a group of people who have come together to share the great Aussie tradition of halal meat in a box.”

My Sheltering-in H.S.P. Our fridge always seems to contain a supply of frozen fries and a pack of Trader Joe’s Gyro Slices. Gee, all that’s needed are the appropriate sauces.

With a little Internet research, I determined that we have ingredients for a proper garlic sauce: some Vegenaise mixed with Goya Minced Garlic and dribs of olive oil and lemon juice transform the combination into something akin to the French aioli.

The pantry has an unopened La Marocaine Harissa that’s best by 10/03/20. I say open it now for the hot sauce.

Our fridge’s Dynasty Hoisin Sauce, appropriately jazzed up with some honey, makes a fair dinkum BBQ. Or call it Fusion H.S.P.