AS IS WELL documented, the world’s first and greatest consulting detective experienced a Great Hiatus extending from Monday, May 4, 1891, to Thursday, April 5, 1894. Have you ever wondered what literary agent Arthur Conan Doyle did while Holmes was off galavanting in Tibet, Mecca, Khartoum, Montpellier, France, and other places? Me too.

Conan Doyle would have evidently missed his regular ten percent of Dr. John H. Watson’s chronicling income. But, it turns out, the literary agent found a way to tide things over.

A Chance Meeting in a Paris Café? Just as Holmes met his chronicler Watson at Bart’s, it seems likely that an hussard vieux named Brigadier Gerard bent Conan Doyle’s ear in some Parisian café or other. From the old hussar’s first ramblings, the crafty literary agent sensed he had found another live one, er, client.

Here, in Parts 1 and 2 today and tomorrow, are tidbits gleaned from The Complete Brigadier Gerard, 1894–1903, The Strand Magazine, literary agent Conan Doyle finessing himself as author, rather than “as told to.”

The Illustrated & Complete Brigadier Gerard: All 18 Stories with the Original Strand Magazine Illustrations by Wollen and Paget,

Gerard, a Typical Gasconade. Gerard was born in Gascony in the early 1780s. This region of his birth is telling: As cited here at SimanaitisSays, even Merriam-Webster recognizes that “The citizens of Gascony in southwestern France have proverbially been regarded as prone to bragging.”

It’s easy to imagine literary agent Conan Doyle saying, “Have a bit more plonk, my good Brigardier, and tell me about….”

Gerard joined the 2nd Hussars, the Hussars of Chamberan, around 1799 and saw action at Marengo in Italy in 1800. By the way, the term “hussar” for a light cavalry scout has eastern European origin (Hungarian: huszǎr,; Serbian: husar). It’s not unrelated to the Medieval Latin cursarius, whence “corsair.” 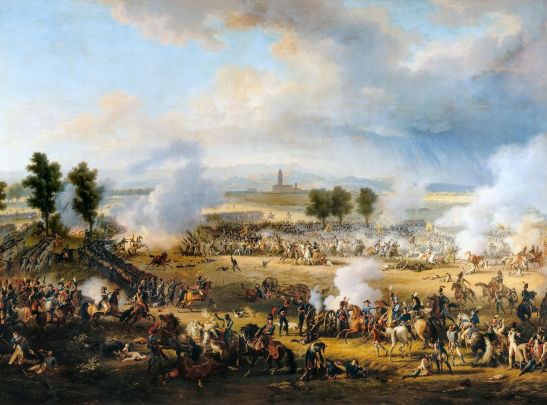 Another aside: Napoleon’s victory at the Battle of Marengo comes up in a crucial point of Puccini’s Tosca,, as recently heard in Metropolitan Opera’s free streaming. In Act 2, Sciarrone, one of evil Baron Scarpia’s henchmen, interrupts interrogation of Tosca throb Cavaradossi to say Napoleon’s troops are on their way to Rome. As Sir Denis Forman cites in his entertaining A Night at the Opera: An Irreverent Guide to The Plots, The Singers, The Composers, The Recordings,

“Huzza shouts Cav: now you’re in for it Scarpia you pig.”

In 1807, Gerard transfers to the 3rd Hussars of Conflans, where he soon advances to colonel. In 1814, he is awarded the Légion d’honneur by Napoleon.

Tomorrow in Part 2, Gerard has a Napoleonic adventure, albeit not likely the one earning him the Légion d’honneur. ds

This entry was posted on April 26, 2020 by simanaitissays in The Game is Afoot and tagged "The Complete Adventures of Brigadier Gerard" Arthur Conan Doyle (as told to?), Etienne Gerard (boastful) Gasconade, Gerard at Battle of Marengo (Marengo in "Tosca" too), Gerard hussar (light cavalry scout).