OLD CAR ENTHUSIASTS (these first two words with or without a hyphen) associate the name MG with classic sports cars, its TC, TD, and TF variants, as well as the even earlier M-Type Midget and C-Type. Here at SimanaitisSays, there was also the Phillips MG, a precursor of today’s subject, the MGA. 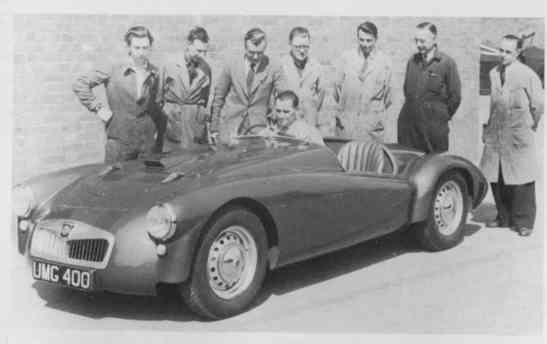 Four years later, immense tragedy struck the 1955 Le Mans, but that event can also be remembered for the introduction of Abingdon’s production MGA. The car remained in production until 1962, with evolution of four MG-A models (the hyphenated nomenclature appearing in R&T’s September 1961 road test of the 1600 Mk II).

This and the following images from R&T, September 1961.

Here are tidbits gleaned from this road test of a car R&T called “truly the ‘universal’ sports car.” In the interest of saving hyphens, I adopt here the modern convention of calling it an MGA.

Prominently featured are the engine’s twin SU carbs, the synchronization of which amused enthusiasts before the days of non-fiddly fuel injection.

Deft use of the MGA’s four-speed gearbox (with a de rigueur double-clutching non-synchro first gear) gave a standing-start acceleration time of 12.8 seconds to 60 mph and a quarter-mile speed of 71 mph in 18.7 seconds.

MGA Handling. R&T commended the car’s good handling and steering: “This is not saying that the MG is the best cornering sports car in the world, or that it has perfect steering. But the car has no vices, and a novice or a veteran can get into the MG and put it through its paces without getting into trouble.”

Exactly my view today in assessing our 1990 Miata.

“The steering may feel strange at first because it’s so unlike what you’re used to,” R&T said. “The rack and pinion has a slight frictional effect and, more important, absolutely no play or back-lash. There’s no need to move the steering wheel back and forth a few degrees to hold a straight line down the highway. Just set the wheel where you want it and move it occasionally in the direction you want, with no see-sawing.”

And, as a related topic, have you noticed how simulated driving on TV or in movies always shows see-sawing?

R&T observed, “The ride qualities of the MG haven’t changed by any noticeable amount since i.f.s. (independent front suspension) was adopted in 1950…. In other words, the MG of 1950 [the TD] was one of the best riding sports cars on the market; today, it ranks among the poorest, excluding the pure competition machines, which are invariably very harsh indeed.”

The Morgan, of course was a special case: Its limber chassis countered its rock-hard springing.

The 1600 Mk II can be identified by its grille bars recessed at the bottom and by its taillight design.

A Concluding MGA Tidbit. The R&T test failed to mention, but according to Wikipedia, “In the United States, the MGA was used in NASCAR from 1960–63 in the Grand National Series, failing to win a single race.” For quite some time, MG was the last foreign automaker to compete in NASCAR.

Toyota (which, of course, now has plenty of U.S. manufacturing) started with its Tundra in 2004 and its Camry in 2007. This year, four of NASCAR’s 20 teams are running Camrys (the others are split nine Chevrolet, seven Ford). As of March 9, 2020, Compughter Ratings has Joe Gibbs Racing drivers rated 4th and 7th among 43 competitors in the 2020 NASCAR Cup.

Capable though the “Family Camry” is, I suspect it won’t replace the MG among old car enthusiasts (hyphen at your pleasure). ds