YESTERDAY, JOHN BARRELL introduced us to John Taylor, Englishman of George III’s era. Despite Taylor’s outward image of blandness, he was also engaged in skulduggery as part of his majesty’s secret service. Today in Part 2 Taylor is found to be a bigamist and perjurer as well.

Bigamy. Not particularly known for being trustworthy, “… Taylor was a liar on a grander scale, as the world was about to discover.” In November 1794, he was brought to trial on a charge of bigamy. Two parish registers established that Taylor had married Margery Sophia Richardson while already married to Sarah Marshall.

An open and shut case, one would think. But the trial had bizarre aspects: “Sarah Taylor, née Marshall, was on hand to tell the court that she suffered from ‘a natural defect, which rendered the consummation of the marriage impossible’; but, as his true wife, she was not permitted to testify that she was not his wife at all.”

Margery Richardson testified that she knew Taylor wasn’t a bachelor, “but claimed this second marriage was ‘perfectly justifiable,’ in that it enjoyed the blessing of his first wife, with whom she was on terms of great friendship: Indeed, the three were living together under the same roof.”

The prosecutor wasn’t having any of this: He noted that Richardson was “yet to be considered in point of law in no other view than a prostitute….” The jury agreed, and Taylor was found guilty as charged.

But Then There’s the LCS Matter. Taylor was to be the government’s star witness at the upcoming London Corresponding Society treason trial. True, bigamy was classified as “felony with benefit of clergy,” with a maximum sentence of a year’s imprisonment. But mitigating circumstances were found, Taylor was fined one shilling, sentenced to a fortnight in stir, and then discharged—coincidentally two days before the treason trial began. 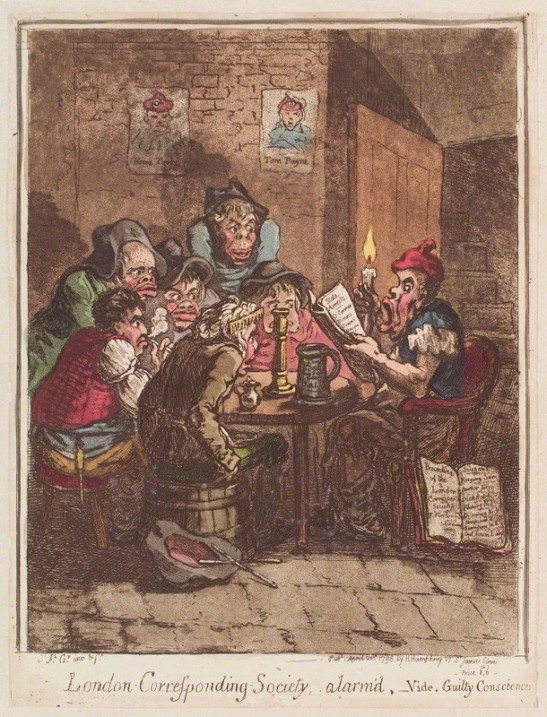 The London Corresponding Society was a British radical association formed in 1792, one goal of which was universal manhood suffrage in Britain. (This didn’t arrive until 1918.) Cartoon by James Gillray, 1798.

Perjury. Star witness Taylor was not only a convicted felon, but already a perjurer. And things got worse: Another of the witnesses knew him under a phony name, though Taylor advised the fellow “please tell the court you have always known me as Taylor.”

“Thus, by the end of the third day, Taylor, a discharged felon, had been revealed as a serial perjurer who had attempted to suborn a potential witness to commit perjury on his behalf.” On the basis of this, the accused LCS member was found not guilty of treason. However, having been a government mole, Taylor was not indicted for his perjuries.

The Aftermath. “Nor do Taylor’s bigamy and perjury appear to have damaged him much in the eyes of his friends. A hundred years later, and one could easily imagine them leaving him alone in the library with a loaded revolver.”

In contrast, the worst that Taylor experienced was having an invitation to the Athenian Club withdrawn when it appeared likely he’d be blackballed.

Author Barrell’s Concluding Assessment. John Barrell’s London Review of Books article is almost 8200 words in length. “A number of historians,” Barrell writes, “have noted, with some regret, that Taylor makes no mention in his autobiography of the work he undertook on behalf of the government in the early 1790s. But this is hardly surprising.” Taylor’s Records of My Life was published in 1832, the year that Britain’s Great Reform Act was passed.

First page of the Great Reform Act of 1832. Its enactment coincided with the year of John Taylor’s death. His autobiography was published posthumously.

“For several years I have been intrigued by the contrast between the dark side of Taylor’s life, of which I knew something, and his sunny side, a Tory hack, bad poet and celebrity-chaser, of which I knew little…. Nine tailors make the man, says the proverb, so perhaps I should be grateful that only four Taylors made up the John Taylor of the historians.”

And I am grateful that the London Review of Books chose to republish “The Reptile Oculist: John Barrell on the Trial of the Mysterious John Taylor.” ds