IT ALL BEGAN with bigger sticks, then chemical firepower, then atomic fission, then intercontinental ballistic delivery. The new arms race, with China, Russia, and the U.S. already major players, depends not on power nor range, but on hypersonic maneuverability. Missiles will bob and weave through the stratosphere at Mach 5 or greater.

An overview of hypersonic weaponry is given in “Need for Speed,” by Richard Stone in Science, January 10, 2020. Here are tidbits on this fascinating, not to say daunting, technology.

Mach 5 and Greater. We already have means of traveling at Mach 33, with the Space Shuttle reaching around 25,000 mph. Gliding back to Earth, this craft encounters significant atmosphere at around Mach 25, nearly 20,000 mph. But, like an ICBM, on return to Earth the Space Shuttle is operating ballistically, not initiating significant changes in direction.

In “Need for Speed,” Richard Stone notes, “From a base in the Ural Mountains on 26 December 2018, Russia’s armed forces launched a ballistic missile carrying an HGV [hypersonic glide vehicle] called Avangard. After separating from its carrier in the stratosphere, the HGV zigzagged 6000 kilometers across Siberia at a searing Mach 27, Russian officials claimed, then smashed into a target on the Kamchatka Peninsula.”

Zigzagging. Maneuverability is what separates HGVs and HCMs (hypersonic cruise missiles) from traditional ICBMs. In its arc, an ICBM travels well beyond the International Space Station’s 250 miles above Earth. However, an ICBM’s ballistic path diminishes its element of surprise and allows possible intervention. Much more difficult is the challenge of destroying a maneuverable hypersonic craft. 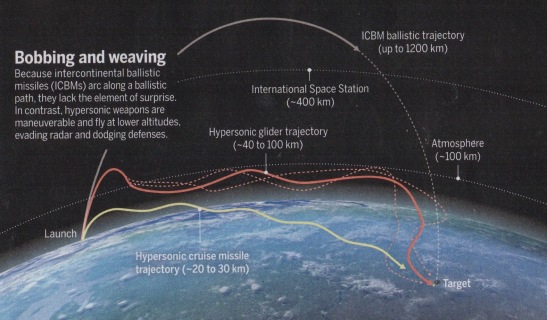 This and the following images are from Science, January 10, 2020.

It’s challenging technology, however. Stone writes, “At hypersonic speeds, air molecules spend milliseconds in the engine tube—scant time for fuel and air to mix properly. And when a vehicle pitches and yaws, airflow into the engine changes, which can result in uneven combustion and thrust.”

HCM or HGV? To Propel or to Glide? The choice of technology is complex. The HGV, for example, requires a launch vehicle to initiate its glide, and such a launch vehicle reaches speeds greater than an HCM, and thus requires even more challenging technology.

“Still,” Stone notes, “HGVs are easier to maneuver because they lack a scramjet, with its acute sensitivity to pitch and yaw.” On the other hand, they’re only “gliding,” albeit at hypersonic speed.

As an example, in 2011 two Russian researchers, an aerospace engineer and a physicist, gained their country’s military approval to take part in an international hypersonic project funded largely by the European Union.

Then the Russian Federal Security Service retroactively classified much of the country’s hypersonic research. And the two Russian researchers were charged with high treason—five years after the EU project had ended.

Another Russian researcher who participated in a different international project has also been charged with high treason. Stone notes, “Authorities have not signaled when the three researchers will face trial.”

The Dongfeng-17. In the meantime, Stone says, “China has been surprisingly open about its research.” 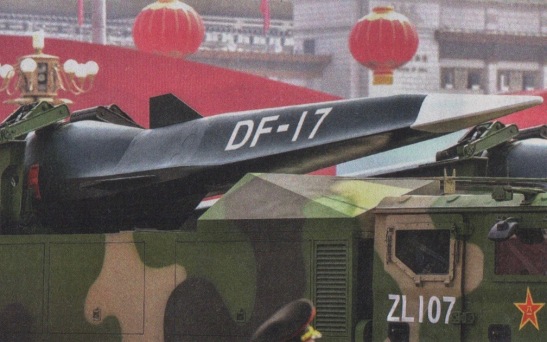