THE FORBIDDEN CITY—AND ME

A RECENT ARTICLE IN The New York Times prompts me to share rare photographs from my personal collection. These images follow, accompanied by the report of “S.U.V. in Forbidden City Prompts Rage at China’s Rich,” by Javier C. Hernández, The New York Times, January 19, 2020.

Hernández writes, “Two women posed with a Mercedes in a revered site usually barred to vehicles, and became unwilling symbols of the wealth and privilege President Xi has promised to rein in.”

This and other images from weixin (WeChat).

Perhaps you don’t speak Mandarin? Google Translate to the rescue: “It took the Forbidden City nearly ten years to scrub the shame of the ‘Ten Gates,’ and the close relationship with the public was easily broken by a silly white sweet showing off privileges and the ‘Big Ben Gate.’ ”

Indeed, I too have been “a silly white sweet showing off privileges.”

Moke posed at the Biltmore, Asheville, North Carolina, 1991. This and other images originating at “From Sea to Shining Sea.”

I hasten to add that Moke and I had been granted Biltmore permission to take this happy snap during our coast-to-coast adventure.

By contrast, Hernández writes, “The palace is typically closed to vehicles, and it was unclear how the woman had gained access…. The woman who posted the photos under the user name Lu Xiaobao LL initially defended her behavior, saying in the follow-up post that she was at the Forbidden City to see an exhibit. ‘It’s not illegal to take a picture, right?’ she wrote.”

Apparently no one ever advised Lu Xiaobao LL on being aware of lighting conditions.

Light, of course, can be handled artistically.

According to Hernández, “On Weibo, a Twitterlike site, one of the women bragged about her exclusive access to the palace, a crowded tourist site, saying she had gone there to ‘run wild.’ ” 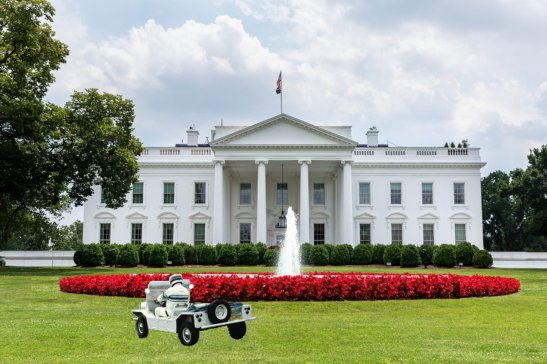 Writes Hernández, “The People’s Daily, the official newspaper of the ruling Communist Party, published a commentary on Saturday saying that a national relic had been violated.”

“Under the rules, everyone is equal,” the newspaper wrote, “No one has the privilege to ‘run wild.’ ”