SEVERAL RECENT ARTICLES got me thinking about human use of language and tools. In particular, AAAS Science, October 9, 2019, had a special section devoted to “Language and the Brain.”

The issue’s Editorial was by Lera Boroditsky, a cognitive scientist at the University of California, San Diego. Boroditsky began by saying, “Languages—exquisitely structured, complex, and diverse—are a distinctively human gift, at the very heart of what it means to be human. As such, language makes for both a particularly important and difficult topic in neuroscience.”

In the magazine’s “Research in Other Journals” section, an item on animal behavior began, “Not too long ago, it was argued that using tools was a hallmark of being human. However, this argument has been dispelled by more recent studies on other species—first by observations in great apes, then in species more distantly related to humans such as crows and dolphins.”

Do we humans have a lock on language and tools? Or are we being egocentric in thinking so? Here are tidbits on the matter from Science and Internet sleuthing.

Language Changes the Human Brain. Boroditsky says, “Language plays a central role in the human brain, from how we process color to how we make moral judgments…. Indeed, a growing body of research is documenting how experience with language radically restructures the brain.”

“For example,” Boroditsky says, “speakers of sign language develop different visuospatial attention skills than those who use only spoken language…. Even seemingly surface properties, such as writing direction (left-to-right or right-to-left), have profound consequences for how people attend to, imagine, and organize information.”

Boroditsky summaries, “The normal human brain that is the subject of study in neuroscience is a ‘languaged’ brain.”

Language: a Continuum Among Species. In the same Science issue, Eric D. Jarvis writes about “Evolution of Vocal Learning and Spoken Languages.” He says, “Language… is sometimes presented as all or none: a species either has vocal learning or it does not. However, differences can be a matter of degree.” 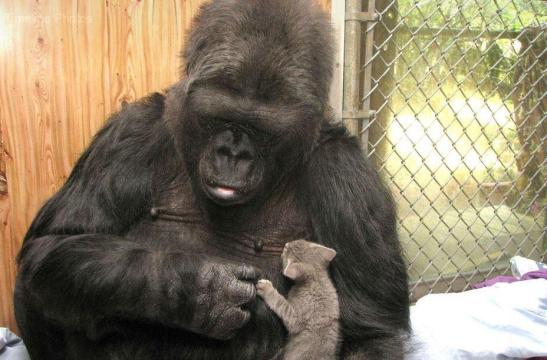 Jarvis gives an example: “By her 30s, Koko the gorilla was producing more than 1000 American Sign Language signs, in word combinations that were not taught to her, and recognizing ~2000 words.”

To paraphrase Professor Boroditsky, Koko was attending to, imagining, and organizing information.

Jarvis says, “Although humans have the largest brains among primates, it is a scaled-up primate brain in size and neuron density.” He also notes that other vocalizing mammals, cetaceans among them, have larger brains than humans.

Are Whales Just Whistling? Or Evolving Communication? Karen Weintraub wrote in The New York Times, January 7, 2019, “… new studies suggest that whales are not just whistling in the water, but constantly evolving a form of communication that we are only beginning to understand.”

And Then There Were Tools. There’s a powerful scene in Stanley Kubrick’s 2001: A Space Odyssey, 1968, when a huminoid grasps a bone as a tool. Later, humans become the tool makers.

But not uniquely, says modern science.

Warty Pig Sticking. In Science, October 4, 2019, Sacha Vignieri reports that “Root-Bernstein, et al. [Mamm. Biol. 98, 102 (2019)] have discovered that the Visayan warty pig can use tools too. Female pigs of this critically endangered species from the Philippines use sticks and bark as digging tools during nest construction…. Although these few observations were made on captive animals, they emphasize that we still have much to learn….” 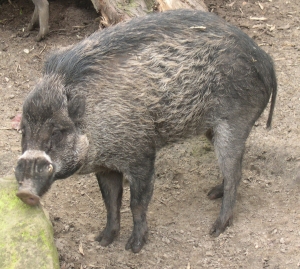 This discovery was made by ecologist Meredith Root-Bernstein at the Jardin des plantes in Paris. For more details and a video, see Peter Stubley’s “Pigs Recorded Using Tools for First Time” at Yahoo!News. ds