AMONG THE MANY adjectives that characterize Alfa Romeo automobiles, “sleek,” “snarly,” and “swoopy” come readily to mind. The word “elegant,” though, usually describes other marques: Bugatti, Delahaye, and the like.

To my eye, the 1934 Castagna-bodied 2.3-Litre Alfa is an exception. It has brio, no doubt, but elegance as well. The January 1956 R&T has this car as a Salon feature, from which the following tidbits are gleaned.

Alfa Brio. A top speed over 110 mph was claimed, with a cruising speed of 70, well beyond the top speed of many cars of the era. “Suspension,” R&T observed, “is by conventional half-elliptics all around, but looking under the front end is a dazzling sight—the front suspension components are chromium plated, a process used in the racing models for the purpose of detecting any tell-tale cracks that might show up during competition. The suspension is, of course, back-breakingly stiff by today’s standards, but shock-absorbers are manually adjustable by a lever on the dash.”

Brakes are enormous drums, 17-in. diameter, cast aluminum and heavily finned for cooling. Wire wheels are of 19-in. diameter.

The shift lever actuates a four-speed transmission, a “crashbox” sans synchromesh. Typical of race cars of the era, the steering wheel is on the right; the accelerator is placed between the brake pedal and clutch.

Snarly Power. “In late 1931,” R&T wrote, “Alfa’s chief engineer, Vittório Jano, came up with a truly wonderful engine: a 2.3-liter, straight-8 version of his famous 1750-cc six. Instead of driving the double overhead cams by shafts and bevel gears, the engine was divided into two 4-cylinder blocks, each with 5 main bearings.”

The cam drive, placed in the middle, was by spur gears which also drove a single Roots type blower located low on the right side of the engine.” 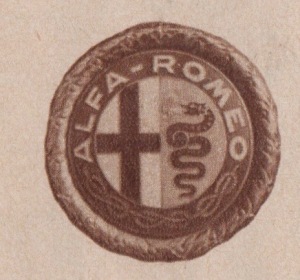 Alfa Elegance. “Two spares are carried on the rear,” R&T observed, “but no bumpers are provided—no one would dare come that close to an Alfa Romeo. A host of luxury features well ahead of their day include such items as tinted glass in the wind-up windows, lighted signal arms that automatically retract after 10 seconds and headlights that can be aimed up or down from the steering column to control beam distance (besides the usual high-and-low beam control).”

Castagna Elegance. Carrozzeria Castagna began business in 1849 when Carlo Castagna bought a Milanese coachbuilding firm from a fellow named Ferrari (not Casablanca’s Signor Ferrari, nor Enzo). And in those days, of course, the products were coaches.

Castagna bodied a Benz quadracycle, perhaps the first of its kind. And in 1914, Milanese Count Marco Ricotti commissioned Castagna to envelope his A.L.F.A. 40/60 HP model in a bizarre futuristic aerodynamic shape. By the way, this was the firm’s name back then, for Anonima Lombarda Fabbrica Automobili. 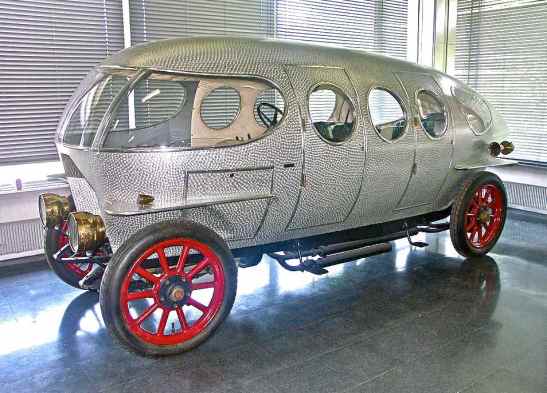 “Although Zagato was the designer most often associated with Alfa Romeo bodies,” R&T observed, “this car owes its fine coachwork to Castagna of Milan. It has the longer (124 in.) of two wheelbases offered, and the body style is basically a 3-seat tourer.”

Elegance, swoopy lines, and brio, all in one handsome shape.

R&T wrote, “the 2.3 Alfas are few and far between today, and the fact that only a half dozen of this Castagna model were built makes it a rare bird indeed—a bird that flies fast and well.”

And does so with elegance. ds