YESTERDAY IN Part 1, we considered a link between drivers of diesel rigs at the modern Ports of Los Angeles and Long Beach and a 62-year-old Katharine Hepburn/Spencer Tracy comedy. Here in Part 2, a professor of informatics shares views on this link.

An Academic View of the movie Desk Set appears in Nathan L. Ensmenger’s 2010 book The Computer Boys Take Over: Computers, Programmers, and the Politics of Technical Expertise. 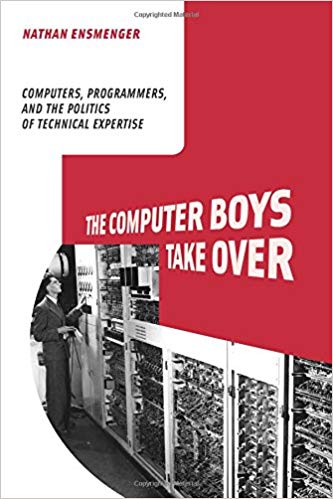 The Computer Boys Take Over: Computers, Programmers, and the Politics of Technical Expertise,

Nathan L. Ensmenger is Associate Professor in the School of Informatics, Computing and Engineering at Indiana University. The relevant chapter of his book can be read in its entirety here.

In particular, Professor Ensmenger observes, “The 1957 film Desk Set is best known to movie buffs as a lightweight but enjoyable romantic comedy, the eighth of nine pictures in which Spencer Tracy and Katharine Hepburn acted together, and the first to be filmed in color.”

“What is less widely remembered about Desk Set,” Ensmenger writes, “is that it was sponsored in part by IBM Corporation.The film opens with a wide-angle view of an IBM showroom, which then closes to a tight shot of a single machine bearing the IBM logo. The equipment on the set was provided by IBM, and the credits at the end of the film—in which an acknowledgment of IBM’s involvement and assistance features prominently—appear as if printed on an IBM machine. IBM also supplied equipment operators and training.”

As for the movie’s plot and happy ending, Ensmenger quotes a movie reviewer of the era: “It simply does not seem very ominous when they threaten to put a mechanical brain in a broadcasting company’s references library over which the efficient Miss Hepburn has sway…. The prospect of automation is plainly no menace to Kate.”

“But if the computer held no dangers for Hepburn,” Ensmenger writes, “it did for many of the real-life office workers watching the film.”

And more was to come: “The 1960s” Ensmenger recalls, “were something of a golden age for the computer industry…. At the beginning of the decade there were roughly fifty-four hundred computers installed in the United States; by 1970 this number had grown to more than seventy-four thousand.”

Concluding Calculations. According to the U.S. Census Bureau, “In 2016, the American Community Survey found that 89 percent percent of households had a computer, making it a common feature of everyday life.”

My calculations concerning budding romances among the workers of the Ports of Los Angeles and Long Beach, à la Desk Set, are rather more sketchy. ds

This entry was posted on May 7, 2019 by simanaitissays in And Furthermore... and tagged "Desk Set" Katharine Hepburn Spencer Tracy, "The Computer Boys Take Over: Computers Programmers and the Politics of Technical Expertise" Nathan L Ensmenger, growth of computers in 1960s, perhaps 141.5 million computers in U.S. in 2018, Professor Nathan L. Ensmenger School of Informatics Computing and Engineering Indiana University.