IN A RATHER indirect way, today’s truck drivers’ dilemma with automation appeared in the silver screen 62 years ago in the Katharine Hepburn/Spencer Tracy movie Desk Set. There’s even a fairly recent (2010) academic book on the matter. Part 1 here offers tidbits on the dilemma and the movie. Tomorrow in Part 2, we’ll get to the book.

The Truck Drivers’ Dilemma involves autonomous control of their vehicles. As reported in the Los Angeles Times, March 21, 2019, “A fierce struggle over automation has erupted at the Port of Los Angeles, as local union officials representing some 12,000 dockworkers demand that one of the world’s largest shipping firms abandon a plan to introduce driverless electric cargo trucks.”

This isn’t the first time that new technology has affected the port. In the 1960s, dockworker unions agreed to accept container shipping in exchange for higher pay and benefits.

At question now are driverless utility tractor rigs. These UTR electric vehicles are proposed to mitigate another problem, the pocket of diesel-generated air pollution in communities near the Ports of Los Angeles and Long Beach. That the UTRs eliminate drivers as well would reduce the cost of implementation.

On the other hand, Mark Mendoza, president of Local 13, International Longshore and Warehouse Union, is quoted in the Los Angeles Times as saying, “This proposal is not about clean air and streamlining business practices. It is about Maersk [the international shipping firm] maximizing their profits at all costs….” 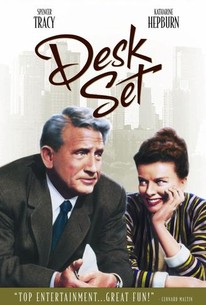 Employees in FBN’s Research Department all fear for their jobs. And, sure enough, another Emmy in the Payroll Department issues them pink slips.

In fact, in a giant computerized glitch, Payroll Emmy even issues the FBN president a pink slip.

This Turner Classic Movies clip gives a flavor of the flick.

In time, all is resolved in Desk Set and romance triumphs.

But it’s too early to tell what’s going to happen with the drivers and UTRs in Los Angeles and Long Beach. Tomorrow in Part 2, a professor of informatics shares views on the matter.