DOUGLAS DST: WHEN FLYING WAS RESTFUL

THE DOUGLAS SLEEPER TRANSPORT arose through airline competition. Transcontinental Air Transport flights in 1929 were anything but uneventful. For example, TAT passengers interspersed train travel with segments aboard Ford Tri-Motors. The Curtiss-Wright Condor offered transcontinental Sleeper-Plane accommodation in 1932, but the part-fabric/part-metal Condor biplane was hardly a state-of-the-art design.

By 1933, United Airlines had an exclusive on the first 60 advanced all-metal Boeing 247s. It was then that Transcontinental and Western Airlines (TWA) leaned on Douglas Aircraft to produce a competing design. The 1933 DC-1 (as in “Douglas Commercial-1”) filled the bill, followed by an even better DC-2 a year later.

DC-2 Douglas Transport. In 1934, Time magazine wrote, “The compact, conservative, painstaking Douglas Aircraft Company… is coming to be regarded as the equivalent of ‘Sterling’ on silver.” 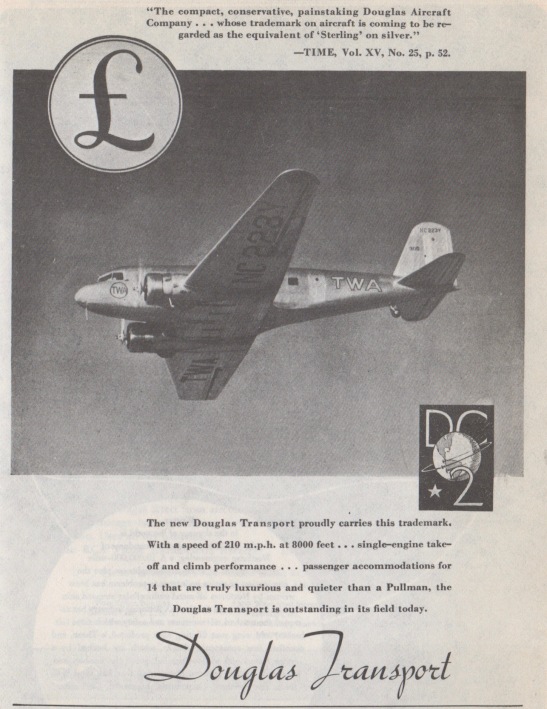 This and images following from Aeroplane (Or Flying Machine) Scrap Book No.3 1911-1941,

But unlike a Pullman railcar, there was no accommodation for overnight travel. The DC-2’s cabin width was 66 in., too narrow for berths on either side of the aisle. This prompted another phone call, and the result was the DST.

Douglas Sleeper Transport. The new design had a considerably wider cabin, 92 in., to accommodate berths. The DST prototype first flew on December 17, 1935, the 32nd anniversary of the Wright Brothers’ Kitty Hawk flight.

The DST carried 14-16 sleeping berths, uppers and lowers. In fact, in 1936 Douglas hyped an American Airlines exclusive: “the Sky Room.”

“Secluded from the rest of the transport and royally appointed for two,” Douglas enthused, “the Sky Room marks another pioneering contribution to air transportation. It is located forward and is complete with berths and lavatory facilities.”

Aft of this was the Salon, providing “14 extra-long berths with individual windows and reading lights, double dressing rooms and lavatories, and a complete galley.” 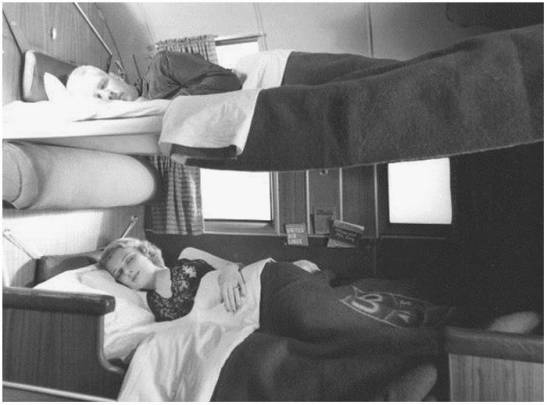 The DST had “down-filled berths—longer than your bed at home.…” Image from strijdbewijs.nl.

The DST traveled at 219 mph with a range of 2100 miles. Not enough for coast-to-coast, but you slept through refuelings anyway. 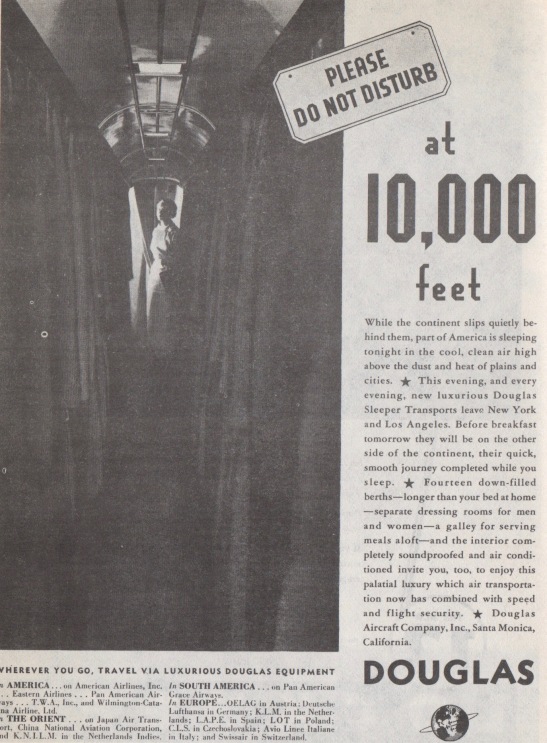 “While the continent slips quietly beneath them,” the Douglas ad read, “part of America is sleeping tonight in the cool, clean air high above the dust and heat of the plains and cities. This evening, and every evening, new luxurious Douglas Sleeper Transports leave New York and Los Angeles. Before breakfast tomorrow they will be on the other side of the continent, their quick, smooth journey completed while you sleep.”

Actually, eastbound flights took about 15 hours, westbound against the prevailing winds took 17 1/2 hours. Three refuelings were part of each trip.

DST to DC-3. It was a practical decision to swap the 14-16 sleeping berths for 21 seats—and call the aircraft the DC-3. This model required no prototypes. It simply followed the first seven DSTs off Douglas’s Santa Monica line and joined the American Airlines fleet.

I suspect that flying First Class in one of today’s giant Airbus 380s is no more pleasant than having one’s own Sky Room. ds

One comment on “DOUGLAS DST: WHEN FLYING WAS RESTFUL”