TIDBITS FROM THE FACTORY FLOOR

FACTORIES ARE wondrous places. Bits and pieces enter one end and, often in seconds, spiffy new products come out the other. Somewhere in between, workers and machines perform their magic. Awhile back, the American auto factory was the topic here at SimanaitisSays. Today, tidbits are gleaned from Wolfgang Streeck’s article, “Through Unending Halls,” in London Review of Books, February 7, 2019. Streeck reviews an academic tome (448 pages) on the topic by Joshua Freeman: Behemoth: A History of the Factory and the Making of the Modern World.

Behemoth: A History of the Factory and the Making of the Modern World,

Joshua Freeman is a Distinguished Professor of History at Queens College and the Graduate Center of City University of New York. Reviewer Wolfgang Streeck is a social scientist working in Cologne, Germany, at the Max Planck Institute for the Study of Societies.

Choosing a Career. LRB reviewer Streeck recalls an early 1960s field trip to the Opel car factory in Rüsselheim: “… the deafening noise, the dirt, the heat, and in the middle of it all, people stoically performing minute predefined operations on the cars-in-the-making that were slowly but relentlessly moving past their work stations.”

“Trained in the classics rather than the real world,” Streeck comments, “I felt like I had entered the workshop of Hephaestus. Looking back, I think it was on that day I decided to study sociology….” 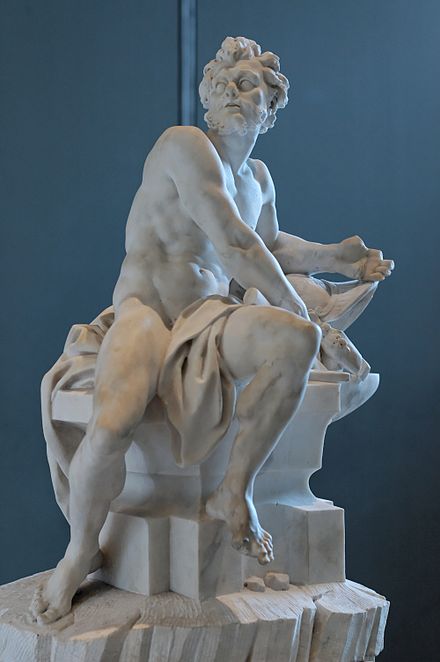 Hephaestus at the Forge, 1742, by Guillaume Coustou the Younger. Hephaestus was the Greek god of metallurgy, blacksmiths, fire, volcanoes, and other such things. Also known as Vulcan in Roman mythology, he made all the weapons for the gods.

Changing Views. Streeck writes, “I included car manufacturing in my empirical work whenever I could… to replenish my supply of mental images of what I tried, often in vain, to convince my colleagues were the Gothic cathedrals of the 20th century.”

However, Streeck found, “On every visit, there was less noise, dirt, and dust; much better air; no welding by hand or overhead assembly; hermetically sealed automatic paint shops; heavy lifting done by machines and later by robots.”

A Surprising Fringe Bennie. Streeck recalls a visit to Volkswagen’s giant Wolfsburg facility, more than thirty years ago: The tour “ended as usual in final assembly, where the only sounds to be heard were soft music and the first firing of the engines at the end of the line as the new cars were driven away.”

“The workers were mostly women, dressed in jeans and T-shirts,” Streeck says. “With a big smile and the male chauvinism that may always be a part of the culture of car manufacturing, my guide, from the all-powerful workers council, said I was looking at the ‘Wolfsburg marriage market’: ‘The lads drop by here when they have a break to see what’s on offer.’ ”

A Swedish Experiment. Auto industry reforms, however, haven’t all been socially successful: “In Sweden,” Streeck writes, “reforms culminated [in the late 1980s] in avant-garde production methods at Volvo and Saab…. ‘group work’ on ‘production islands,’ for instance, where cars were put together almost from scratch by a team and the workers were encouraged to sign the finished product.”

“For a while,” Streeck says, “Saabs and Volvos were the favourite cars of European intellectuals because they were made, it was believed, by ‘happy workers’—until both firms returned to more conventional methods (which did not in the end prevent them being taken over by GM and Ford, respectively).”

After its GM ownership, Saab Automobile AB was acquired in 2012 by National Electric Vehicle Sweden, a Chinese-Swedish consortium which moved into and out of bankruptcy. NEVS announced in 2012 that it would not be using the Saab trademark, though it’s still involved in producing a car based on the Saab 9-3 platform. In January 2019, NEVS formed a strategic partnership with Swedish exoticar maker Koenigsegg AB.

Here, Streeck adopts an ironic note: “As satisfied consumers of the electronic toys, colourful running shoes, and cheap T-shirts that come to us courtesy of modern Asian industrialism, we tend to forget about the way they are produced in China, Vietnam, Taiwan, Indonesia, Cambodia, and Myanmar—in factories not owned but used by firms like Apple, Disney, Adidas and Walmart.”

“The hellish Manchester of early industrialization still exists,” Streeck says, “but on the global periphery, too far away from school trips.”

It sounds like a latter-day Wolfgang Streeck would have a more complex career choice. ds

This entry was posted on March 3, 2019 by simanaitissays in And Furthermore... and tagged "Behemoth: A History of the Factory and the Making of the Modern World" Joshua Freeman, "Through Unending Halls" Wolfgang Streeck "London Review of Books", auto factory early 60s vs one in late 80s, Hephaestus: Greek god of metallurgy/fire/volcanoes, modern Asian factories vs 19th-century Manchester, women on VW final assembly line: "Wolfsburg marriage market".