THE UNITED NATIONS celebrates 2019 as the International Year of the Periodic Table. This familiar array is more than a collection of chemical elements. As described in Science, February 1, 2019, the Periodic Table is itself a paradigm of science.

Here are tidbits gleaned from themes discussed in this special issue of Science.

Science is an Interplay of experimental results and theory. In “Setting the Table,” Philip Szuromi writes, “A sufficient number of elements needed to be discovered and their properties and reactivity understood before systematic trends could be inferred. Science is also fundamentally about making testable predictions.” 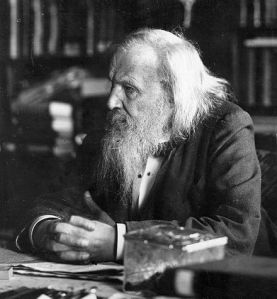 In February 1869, Russian chemist Dmitri Mendeleev published his classification of all the known elements, organized by atomic weights. He also included gaps in his array for the placement of undiscovered elements.

An Attempt at a System of Elements, Based on their Atomic Weight and Chemical Affinity, D. Mendeleev, February 1869. Not long after its original publication, Mendeleev reorientated his array, mirrored and rotated 90 degrees, to the one we know today.

Others, including those heavier than uranium, U = 239, have expanded the Periodic Table to its current form. It’s anything but fixed, though.

”The Quest for Superheavies,”, by Sam Kean, describes work in Dubna, Russia, resuming this spring in a hunt for these transuranium elements. At current count, the International Union of Pure and Applied Chemistry identifies 11 elements having atomic weights heavier than that of naturally appearing uranium.

These transuranium elements are all unstable, radioactive, and decay into other elements, some very rapidly indeed. Nihonium, Nh, with atomic number 113, has isotopes with half-lives measured in milliseconds. Even its most stable form, nihonium-286, loses half its radioactivity in about 10 seconds.

Above, Mendeleev’s 1904 Periodic Table. Below, the Periodic Table, as identified by the International Union of Pure and Applied Chemistry. Images from Science, February 1, 2019. 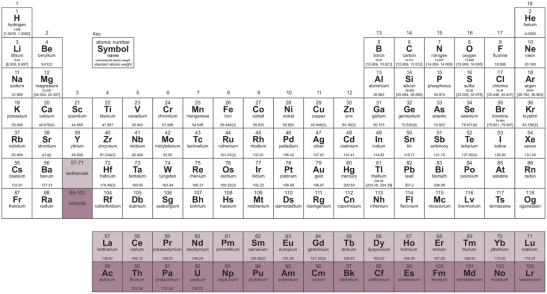 “Ordering the Elements,” by Michael D. Gordin, offers evolution of the Periodic Table, from Mendeleev’s 1869 concept to the chart displayed in just about any science classroom in the world.

Notes Gordin, “What we commemorate this year by declaring it the 150th anniversary of the periodic table was born out of Mendeleev’s struggles to organize information for students…. Today’s periodic table is not precisely the same as Mendeleev’s short form, neither in layout or in content, but it is still used for the same ends.”

And, like any other scientific construct, it is never truly completed. ds