WHAT LANGUAGES did Sherlock Holmes speak? English, for sure, but what about American English? He had French kin, so maybe this too. And what about the classic languages, Latin or Greek? Here, in two parts, today and tomorrow, are conjectures on this, based on several Sherlockian sources and my usual Internet sleuthing. 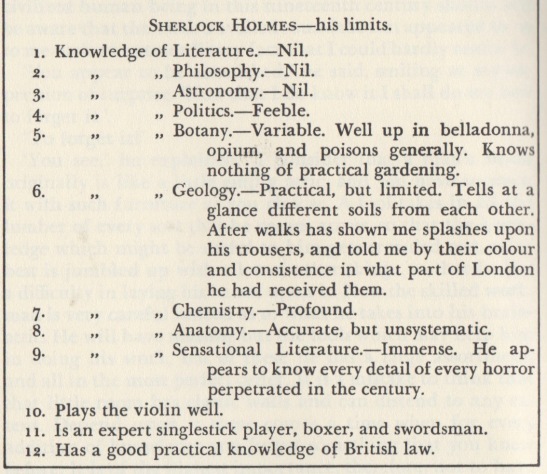 Here and there among the adventures, however, there are intimations that Holmes is not utterly monoglot. In A Study in Scarlet, for example, Inspector Lestrade sees the word RACHE written in blood on the crime scene’s wall.

Sherlock Holmes “examined with the glass the word upon the wall, going over every letter of it with the most minute exactness.” Quote from A Study in Scarlet, image by D.M. Friston, Beeton’s Christmas Annual, 1887, in The New Annotated Sherlock Holmes, Volume III.

“See this smear where it has trickled down the wall!” Lestrade says. “You mark my words, when this case comes to be cleared up, you will find that a woman named Rachel has something to do with it.”

Lestrade later asks, “If this man was murdered, how was it done?”

“Poison,” said Sherlock Holmes curtly, and strode off. “One more thing, Lestrade, ‘Rache’ is the German for ‘revenge’; so don’t lose your time looking for Miss Rachel.”

Other German evidence, though not Watson-canonical, is offered in Sherlockian Michael Hardwick’s Sherlock Holmes: My Life and Crimes.

Sherlock Holmes: My Life and Crimes,

Hardwick quotes Holmes as saying, “All was grist to my mill, and needed study from whatever original sources I could find, for Hans Gross, the Austrian so-called ‘father of criminal research,’ did not publish his famous textbook on the subject until 1891. When I read it (in the original German) I was able to congratulate myself on having anticipated him in many departments, although I found no acknowledgement to my work.” 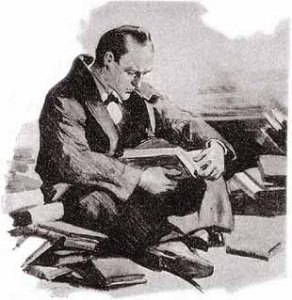 Image from the Sherlock Holmes Cafe.

Yet more evidence of Holmes’ German is offered in Michael Harrison’s I, Sherlock Holmes.

Harrison has Holmes identifying the origin of his German knowledge: “… I spoke German; not perfectly, for I had had little practice since, as a boy, I had spoken it fluently in Cologne—then the most Roman, the most German, the most Jewish, and, above all, the most independent of all the Rhine cities.”

A linguistic Holmes is described in an interaction with a German professor: Harrison cites Holmes saying, “Dr. Klein spoke English well, but there were times when the English equivalent of a German word did not come instantly to mind. The ‘purification’ of the ‘Imperial’ German tongue… had not spared Dr. Klein, and he was mostly at a loss when trying to find an English word of Latin or Greek origin, but which, in modern ‘purified’ German, has been replaced by a word of ‘pure Teutonic’ type.”

“Such a word—or phrase, rather—in English was the translation of the German Stickstoff, that Dr. Klein, at one lecture, tried vainly to find. I ventured a diffident: ‘Nitrogen, sir.’ ”

Harrison also relates a Holmes dinner comment: “Hm,” I muttered, affecting a judicial frown; “this fine first dinner may be in the nature of what the Germans call a Heimgeschenk… do you know that word? No…? It is the gift that neighbours and other friends make to those who enter on a new home. Heimgeschenk… ‘Home-gift.’ ”

As further proof of Deutschekenntnisse, Harrison relates a Holmesian encounter with no less than Queen Victoria: “I understand you speak German well?” she asks.

“I learnt it as a boy in Cologne, Ma’am, and my father never permitted me to forget it.”

Her Majesty Queen Victoria of Great Britain and Ireland Empress of India. Image from The Illustrated London News, 1887, the Queen Victoria Golden Jubilee.

“It was the tongue of my dear Mother,” the Queen says, “of my much-loved Uncle Leopold, and—most important of all—of my sainted Husband, Albert. So let me have the pleasure of speaking and listening to the good old German tongue.”

In summary, we have reason to include knowledge of the German language in Holmes’ list of attributes. Tomorrow, in Part 2, we’ll search for references as varied as French, Latin, Norwegian, Tibetan, and good ol’ ‘Merican. ds