PITY COMPOSERS of the 18th century. As with other artists back then, their livelihoods depended profoundly upon interactions with their social betters. And these gigs often had nobility’s strings attached.

I’ve already described Franz Joseph Haydn’s Esterházy summer of 1772. That gig’s Symphony No. 45 in F# Minor is nicknamed The Farewell, but could have been called We’ve Had Enough!

I recently heard another tale of baroque gigs from Preston Trombly, one of the erudite hosts on Sirius XM’s “Symphony Hall.” The following tidbits evolve from Trombly’s comment, my consultation with Nick Slonimsky’s The Concise Baker’s Biographical Dictionary of Musicians, 8th edition

, and my usual Internet sleuthing. It’s a good story about management/labor/cultural relations c. 1723, with some high notes, some low notes, and a touch of serendipity. 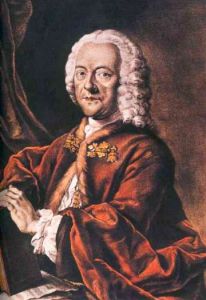 Telemann followed family wishes to study law, albeit only briefly at the University of Leipzig. Music won out, and he held positions in Leipzig (music director of the Leipzig Opera), Sorau (a Kapellmeister position with Count Ermann II of Pomnitz), Eisenach (another Kapellmeister gig), and Frankfurt (the city’s music director back when cities had such extravagances) before settling in Hamburg in 1721. There, Telemann was in charge of five churches and, within a year, the music director of the Hamburg Opera. He held this post until 1738.

All was not Pfirsiche mit Schlag, however. Along the way, Telemann’s wife left him for a Swedish army officer.

(Johann) Christoph Graupner is identified by Slonimsky merely as a “German composer.” Graupner earns a place in this tale because of his 1712 appointment as Kapellmeister to Ernst Ludwig, Langraf of Hesse-Darmstat. Graupner held this post until his death in 1760. 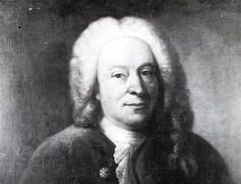 Slonimsky notes that “Graupner was a highly industrious composer: He wrote eight operas, some 1400 church cantatas, 24 secular cantatas, about 100 symphonies, 50 concertos, 80 overtures, and many instrumental sonatas and keyboard works…. He was proficient as an engraver, and printed several keyboard pieces in his own workshop.”

Gee, I take back that “merely.”

Johann Sebastian Bach gets Slonimsky’s unique rating as the “supreme arbiter and lawgiver of music, a master comparable in greatness of stature with Aristotle in philosophy and Leonardo da Vinci in art.”

Slonimsky continues, “The word ‘Bach’ itself means ‘stream’ in the German language; the rhetorical phrase that Johann Sebastian Bach was not a mere stream but an ocean of music (’Nicht Bach aber Meer haben wir hier’) epitomizes Bach’s encompassing magnitude. Yet despite the grandeur of the phenomenon of Bach, he was not an isolated figure dwelling in the splendor of his genius apart from the zeitgeist.”

As an example of this, in 1708 Bach accepted the court organist gig with Duke Wilhelm Ernst of Weimar; in 1714, the duke elevated him to the position of Konzertmeister. Then, in 1717, Prince Leopold of Anhalt made Bach an even better offer: Kapellmeister and music director in Cöthen.

Bach accepted Prince Leopold’s offer; Duke Wilhelm Ernst quibbled about releasing him from his Weimar gig: and, in fact, the duke had Bach held in stir from November 6 to December 2, 1717, before letting him move to Cöthen.

Bach’s Leipzig Leap in 1723 took place following the death of Johann Kuhnau the year before. Kuhnau had been the Thomaskantor, a lauded position as the director of Leipzig’s St. Thomas Boys Choir established in 2012.

As related by Sirius XM’s Preston Trombly, “Since we cannot get the best,” a Leipzig councilman said, “then we will have to settle for the mediocre.”

Johann Sebastian Bach got the Leipzig gig. It lasted until his death in 1750. ds