IN PART 1 yesterday, we learned that the 1903 Wright Flyer was powered by a horizontally aligned inline-four designed and fabricated by the brothers themselves and their mechanician Charlie Taylor. Their design criteria were simple: ample power, yet light weight. Several of their engineering responses were innovative indeed, for example. the aluminum alloy crankcase described in Part 1 and shown here. In Part 2, we’ll examine other aspects that were perhaps more traditional. 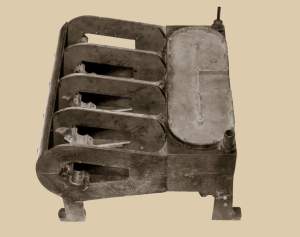 The innovative crankcase of the 1903 Wright engine; its cover removed. Buckeye Iron and Brass Works acquired its aluminum from the Pittsburgh Reduction Company, renamed Alcoa in 1907. Image from airandspace.si.edu.

Other features of the Wright engine were relatively unsophisticated. Its intake valves, on the upside of the engine, were of the atmospheric variety, opened solely by partial vacuum created by the pistons’ intake stroke.

The 1903 Wright engine. This and other images from wright-brothers.org.

The exhaust valves below the combustion chambers were mechanically actuated, their camshaft doing double duty in operating each cylinder’s make-and-break ignition. No spark plugs were fitted. 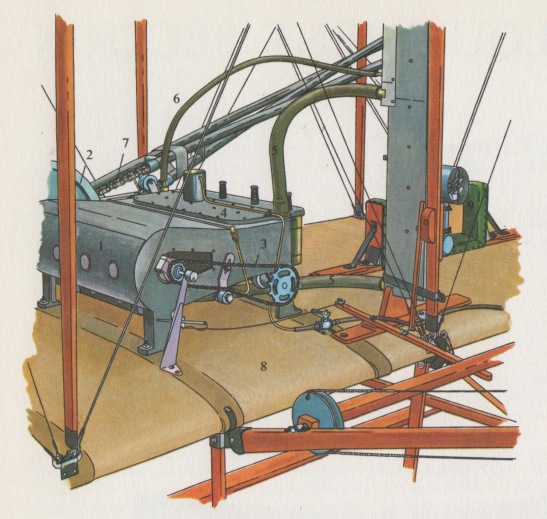 The engine was water-cooled, its cylinders (but not combustion chambers) encased in a jacket fed from a radiator mounted to a wing strut. One source claims this was solely for replenishment with neither circulation nor heat transfer. I’m more confident with an analysis offered by NASA’s Glenn Research Center describing this system’s gravity-feed (that is, sans water pump) operation.

Taylor described the engine’s ignition: “The spark was made by the opening and closing of two contact points inside the combustion chamber. These were operated by shafts and cams geared to the main camshaft. The ignition switch was an ordinary single-throw knife switch we bought from a hardware store.” 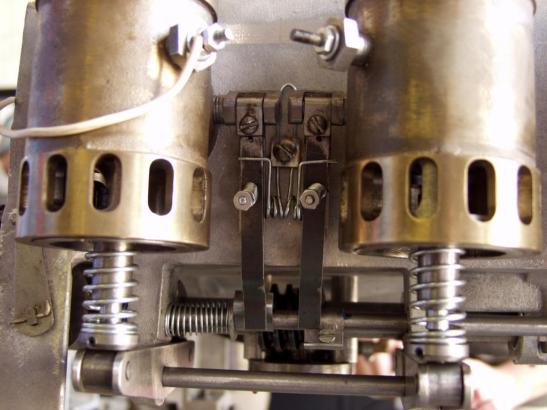 This detail shows the mechanism that opens and closes the ignition points. Image from wright-brothers.org.

“Dry batteries,” Taylor said, “were used for starting the engine, and then we switched onto a magneto bought from Dayton Electric Company.”

Fuel delivery was rudimentary: A 22-oz. canister was attached to a wing strut, its gasoline fed by gravity alone down a tube to the engine. There was no throttle; a simple petcock controlled flow.

“There was no carburetor as we know it today,” Taylor said. “The fuel was fed into a shallow chamber in the manifold. Raw gas blended with air in this chamber, which was next to the cylinder and heat up rather quickly, thus helping to vaporize the mixture. The engine was started by priming each cylinder with a few drops of raw gas.”

The original Wright Flyer powerplant was first run on February 12, 1903. According to wrightbrothers.org, “The very next day it overheated and seized up on the bench during a test run. New castings arrived from the foundry on 20 April 1903 and Charlie had the engine rebuilt and read to go by early June.”