Today’s Part 1 involves Holmes’ receipt of this telegram. Tomorrow in Part 2, we’ll unravel some of its implications.

“The Adventure of the Missing Three-Quarter” began when Mr. Cecil Overton of Trinity College, Cambridge, sat down with Holmes and Watson at 221B Baker Street. Watson described him as “an enormous young man, sixteen stone of solid bone and muscle, who spanned the doorway with his broad shoulders, and who looked from one of us to the other with a comely face which was haggard with anxiety.” 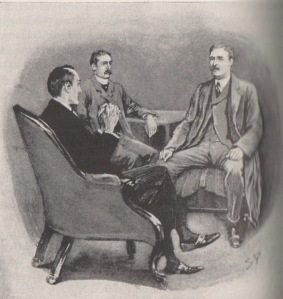 Overton was skipper of the Cambridge ‘Varsity Rugger. And the team’s star right wing three-quarter, Godfrey Staunton, had gone missing just before the big game with Oxford.

Cambridge University has played rugby since 1872, three years after Oxford took up the sport.

Overton’s anxiety was well founded: “I’d rather spare two from my pack,” he said, “and have Godfrey for my three-quarter line. Whether it’s passing or tackling, or dribbling, there’s no one to touch him….”

“What am I to do?” Overton said. “There’s Moorhouse, first reserve, but he’s trained as a half, and he always edges right in on to the scrum instead of keeping out on the touch-line. He’s a fine place-kick, it’s true, but, then, he has no judgment and he can’t sprint for nuts.”

“Stevenson is fast enough,” Overton continued, “but he couldn’t drop from the twenty-five line, and a three-quarter who can’t either punt or drop isn’t worth a place for pace alone. No, Mr. Holmes, we are done unless you can help me to find Godfrey Staunton.”

And, incidentally, we the readers are done as well unless Holmes or someone explains all this rugby jargon.

For once, Holmes is the wrong choice: “You live in a different world to me, Mr. Overton,” Holmes says, “a sweeter and healthier one. My ramifications stretch out into many sections of society, but never, I am happy to say, into amateur sport, which is the best and soundest thing in England.” 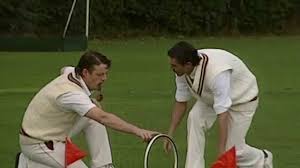 Pause here, if you like, for a wonderful satire from Jiskefet titled “English Sports.”

Fortunately, Leslie S. Klinger, editor of The New Annotated Sherlock Holmes comes to our rescue with an appended “The Rules of Rugby.”

Klinger recounts the tale of a Rugby School student who, in 1823, broke the rules of football (soccer, as we call it in the U.S.): “The story, probably apocryphal,” Klinger says, “has elicited its share of controversy…. Nonetheless, a plaque at Rugby School… proudly commemorates the antics of the sixteen-year-old ‘who with a fine disregard for the rules of football as played in his time, first took the ball in his arms and ran with it.’ ”

Aha. A clue. In this regard, rugby sounds sorta like American football.

Well, yes and no. As we’ll find tomorrow in Part 2, each of these offshoots of traditional football offers its own unique entertainment—and mayhem. ds

One comment on “HOLMES AND RUGBY (MOSTLY RUGBY) PART 1”