THIS SUMMER has had a lot of hot air, everywhere from Washington, D.C., to Helsinki, and back. This got me thinking of how we measure its forceful expenditures. Add to this, our friend René in Maine was expecting 40-mph winds. And, next thing I knew, I was researching Sir Francis Beaufort and his Wind Force Scale. 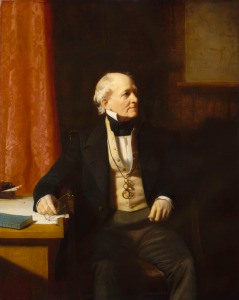 Beaufort’s achievements came just after natural philosophers became known as scientists. His title of hydrographer identifies a chief claim to fame: graphing the movement of water in a detailed manner.

The letters after Beaufort’s name identify, respectively, his knighthood in 1848 (the guy had to wait until age 72 for this one), fellowship in the Royal Society (“natural knowledge, including mathematics, engineering science, and medical science,” i.e., the traditional meaning of natural philosophy), Royal Geographical Society, Royal Astronomical Society, and membership in the Royal Irish Academy.

For those working up a screenplay about his life, Beaufort left formal schooling at age 14 and went to sea. Being shipwrecked by faulty charts a year later got him thinking…. In time, self education brought Beaufort in contact with the scientific minds of Great Britain. This should be the hook.

Beaufort rose in the British East India Company and the British Navy from midshipman to lieutenant to commander to captain. During the Napoleonic Wars, he served admirably and (remember that shipwreck) took a special interest in taking soundings and bearings, making astronomical observations, and measuring shorelines.

At age 55, Beaufort was appointed the British Admiralty Hydrographer of the Navy, a post he served 25 years. According to Wikipedia, there are charts still in use today that were produced during his tenure.

As is the Beaufort Scale: his correlation of wind speed and observed conditions at sea or on land. Beaufort devised this scale early in his career, in 1805 while serving on the HMS Woolwich. Wikipedia notes that she was an “Adventure-class frigate launched in 1784. She essentially spent her career as a storeship before being wrecked in 1813.”

Rest easy, screenwriters, Beaufort left her in 1808 for HMS Blossom. On the other hand, the Woolwich had been driven 90 miles off-course by a gale, bilged, and fell on her side off the Caribbean island of Barbuda. Her crew was saved; so a happy ending all around.

Beaufort based his scale on previous efforts, including one by Daniel Defoe a century before. The scale’s importance was in standardizing what had previously been highly subjective weather observations: e.g., a “stiff” or “soft” breeze.

A Force 12 at sea. Image from the National Oceanographic and Atmospheric Administration, back when it was encouraged to share science with the public.

Initially, Beaufort had 13 Force levels, 0 to 12, relating wind conditions to effects on a frigate’s sails, from “just sufficient for steerage” to “that which no canvas sail could withstand.” The adoption of measured wind speed came after 1845 with interpretation of cup anemometer rotations.

With the coming of steamships, the scale used the appearance of the sea, not condition of sails. Standardization of anemometer rotations came in 1923. The Beaufort Scale was extended in 1946, with Forces 13 to 17 added for tropical cyclones.

To get all nitty about it, wind speed v is related to Beaufort Scale B by the relationship v = 0.836 B3/2. When you use this, note that v is wind speed at 10 meters above the sea surface.

There’s also a Saffir-Simpson Hurricane Scale, devised in 1971, with Categories One through Five. Needless to say, there are those who criticize this scale as being overly simplistic. And others who suggest the need for a Category Six.

I prefer Sir Francis Beaufort, KCB, FRS, FRGS, FRAS, MRIA, and his “that which no canvas sails could withstand.” It’s a pity there are few sails in Washington, D.C. these days.

By the way, a 40-mph wind qualifies as a Force 8 Gale, but things didn’t get that exciting in Maine this time around. ds