Yesterday at SimanaitisSays, we encountered the challenge of understanding rugby jargon, part of “The Adventure of the Missing Three-Quarter.” Here in Part 2, we profit from editor Leslie S. Klinger’s continued description of rugby, related, but only to some extent, to the American sport of football. And not to be put off with the rest of the world’s understanding that football is what we Yanks call soccer.

In particular, Klinger observes that, unlike football, there are no huddles; action in rugby is continuous. Players move the ball (ovoid, but less pointy than our football) down the field by carrying it, kicking it, or passing it behind or laterally.

There are no forward passes. Nor is blocking allowed: The ball-carrier’s teammates must stay behind him. Opposing players, though, are free to stop his progress by tackling him.

Cambridge University Rugby now includes a women’s squad. Please forgive male pronouns in this narrative; I’m not about to anger these young ladies.

Note, rugby players wear none of football’s extensive padding and protection. In fact, Klinger writes, “Some seventy deaths were reported in English rugby games from 1890 to 1893 alone, although numerous regulations enacted since then, including the prohibition of tripping and ‘hacking,’ have greatly lessened the risk of serious injury.”

“Once a player is tackled and the ball touches the ground,” Klinger notes, “he must immediately relinquish it, either passing the ball backward to a teammate or surrendering it to a member of the opposing team. More common is a loose maul, a sort of multiplayer semi-tackle in which the ball carrier’s progress is temporarily halted and offensive and defensive players swarm around him fighting for possession.”

Of course, fighting for the ball occurs sub rosa in our football tackles, but it’s positively encouraged in rugby.

Another bit of regulated mayhem is the scrum or scrummage. Klinger explains, “Should the ball-carrier drop or pass the ball in any sort of forward motion, or should a team be called offside [remember, mates must remain aft of the ball-carrier], then play is stopped for a scrum.”

“Here,” Klinger says, “the [eight] forwards on each team lock arms and face off against each other, pushing forward to form a roiling mass into which the attacking team ‘scrum-half’ rolls the ball. Both teams attempt to kick the ball backward out of the scrum, and play continues at the same chaotic pace as before.”

This 2016 Cambridge/Oxford match gives an idea of rugby’s semi-controlled mayhem. 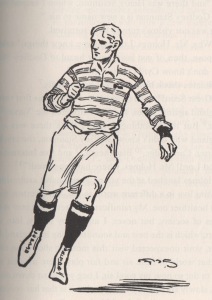 Could this be the missing Mr. Godfrey Staunton? His outfit is correctly Cambridge. Illustration by Frederick Dorr Steele, Collier’s, 1904.

Klinger also cites the 15 team positions: a full-back [the last defensive guy], two half-backs [who hang out near the touch-lines], four three-quarter backs, and eight forwards. Which brings us to back to “The Adventure of the Missing Three-Quarter.” ds