WHAT WITH the world at sixes and sevens (now there’s a phrase to investigate!), it’s worth identifying the sources of petroleum and its products imported into the U.S. Recent data show some continuing trends as well as a few surprises.

Here are the latest data available from the U.S. Energy Information Administration, as of January 2018. There are also tidbits gleaned while assembling these and data from other sources.

Saudi Arabia was second in 2016, with 12.7 percent of the world’s total production. It’s the only member of the Organization of Petroleum Exporting Countries to make the top five.

Diminishing U.S. imports. According to the U.S. EIA, net imports (imports minus exports) of petroleum in 2017 were about 19 percent of U.S. petroleum consumption. This was the lowest percentage since 1967. When SimanaitisSays examined this in “Well Oiled,” December 2016, U.S. net imports were at 24 percent of total consumption.

This and the following images from data provided by the U.S. EIA.

A January 2018 snapshot. EIA data for January 2018 provide a good snapshot of U.S. imports by country of origin, the unit of measure being thousands of barrels of petroleum, both crude oil and products.

The U.S. imports oil from more than 80 countries, because of economic, political, and strategic reasons. For example, crude oil from Nigeria is particular sweet, i.e., low in sulfur; that from the Gulf of Mexico is less sweet, and thus involves higher refining costs.

Persian Gulf countries accounted for 15 percent of total U.S. imports. OPEC countries, which include Western Hemisphere Ecuador and Venezuela, made up for 29 percent of the total.

Canada has held this position for years. Typically, second place had been swapped between Saudi Arabia and Mexico. In this latest data, though, Iraq piped Mexico as the U.S.’s third largest supplier.

Another way of examining the top ten exporters of petroleum to the U.S.

The full list of U.S. imports suggests a strategic supply chain stretching around the world. Among minor exporters, some with only a few thousand barrels/month, are Bahrain, Curacao, Greece, Hungary, South Africa, Sweden, and Switzerland. 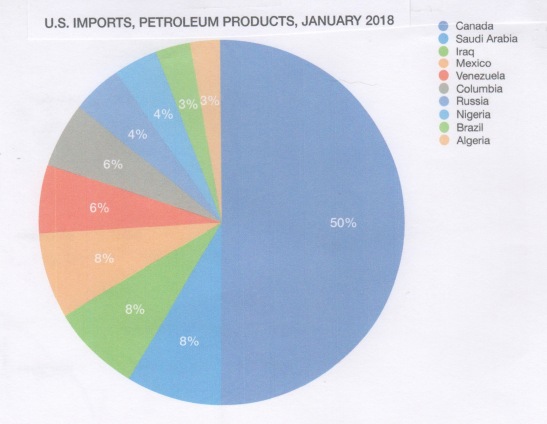 Petroleum is truly a global game, in which the U.S. is a major player. ds

This entry was posted on April 20, 2018 by simanaitissays in Sci-Tech and tagged investopedia.com, U.S. Energy Information Administration, U.S. oil domestic/imports.