But wait! There was also a car called the Wanderer. Indeed, in 1932 four German automakers merged to form Auto Union. These were Horch; Audi (a Latinized Horch, as in “listen,” after August Horch left his euphonious firm to start another company); DKW (Das Kleine Wunder); and Wanderer. Auto Union’s four-ring logo is still used by Audi.

Wanderer got me thinking: What other opera characters share their names with automakers?

My two automotive sources in this are The Complete Encyclopedia of Motorcars, 1885 to the Present

and The Encyclopedia of Motor Sport

. Brit automotive historian Nick Georgano assembled teams from around the world to put together these two standards totaling 1290 pages.

Given heldentenor prestige, it’s no surprise there was a Siegfried automobile too. This car, marketed under the name Reissig as well, was produced in Germany between 1912 and 1914.

There was also the Fafnir, an accepted spelling for one of the two giants in the Wagner Ring Cycle. The Fafnir automobile was built in Aachen, Germany, between 1908 and 1926.

The famous German Grand Prix driver Rudolf Caracciola drove a Fafnir in his first race, on the Berlin Avus circuit in 1922.

In Das Rheingold, the Ring’s first opera, Fasolt and Fafner are the giants stiffed by Wotan after they built his Valhalla. (Imagine that!) Before Das Rheingold is over, all in one long! act, Fasolt gets clubbed to death by Fafner, who eventually returns to get his by Siegfried during, you guessed it, Siegfried. 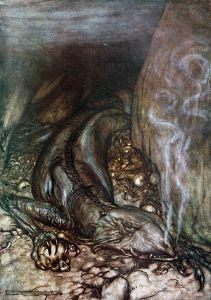 Fafner, in his dragon form, about to battle Siegfried. Illustration by Arthur Rackham.

Tomorrow, we’ll encounter more automotive/operatic links, one with a very familiar name, another involving Jack the Ripper. The opera, not the car. ds