THE TRUISM “racing improves the breed” was more than justified by Frank Kurtis and his sports cars. Indeed, Frank first displayed his expertise fabricating bodies for race cars in the midget class fielded by enthusiast (and Los Angeles TV pioneer) Don Lee. In the late 1930s, Kurtis began building chassis for midget race cars at his Kurtis Kraft shop in Glendale, California. In time, 120 Kurtis Kraft roadsters dominated the post-war grid at the Indianapolis 500, five of them the winning cars in 1950, 1951, 1953, 1954, and 1955.

The first Kurtis sports car. This and the following two images from R&T, April 1953.

R&T had it right in its headline in April 1953, “The Sports Car with the Speedway Look.” The chassis of the Kurtis sports car was a widened version of the Indy roadster’s channel and tube design. Suspension also paid homage to the Speedway in being basic indeed: solid axles, torsion-bar suspended, and located by trailing arms in front, leading arms at the rear.

Of this seemingly antediluvian layout, R&T observes, “After many years of experimental work on ‘fancy’ suspensions, Frank Kurtis feels that for most competition work you can’t beat the high roll center advantage of solid axles front and rear.”

Efficacy of this Indy-roadster-turned-sports-car was displayed first time out: Bill Stroppe (later a Ford racing legend) employed the Kurtis’s impressive acceleration to best the competition at Gardena’s Carrell Speedway.

“Frank Kurtis points out the special radiator…” This and the following images from R&T, October 1953.

The Kurtis-Hornet Roadster road test listed a price, still omitting engine and gearbox, of $4986. As its name suggested, this particular car had involvement of a Hudson dealer. The car’s 308-cu.-in. inline-six Hornet’s relatively modest 160 hp combined with a 2560-lb. test weight (two testers aboard) to give what R&T termed a “boost in the back.” To wit, 0-60 mph acceleration in 7.7 seconds. (A typical car of the era took at least twice as long.) 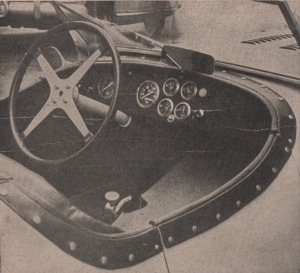 “A steering ratio which required only 3.2 turns lock to lock was also a pleasure and did not prove tiring,” R&T reported.

“The very trite expression ‘corners as if on rails’ is the only way to describe how this car handles,” R&T said. “… the Kurtis neither oversteers nor understeers. It just goes around—easily, fast and flat!”

1954 Kurtis 500S. This and the following image from Gooding & Company catalog, Scottsdale auction, 2011.

A 1954 Kurtis 500S sold for $112,750 at Gooding & Company’s 2011 Scottsdale auction. A beautiful example, the car came with a family story. Gooding & Company writes, “During the 1980s, Frank Kurtis and his son Arlen purchased a 500S chassis that was in need of total restoration and they embraced it as a family project.” 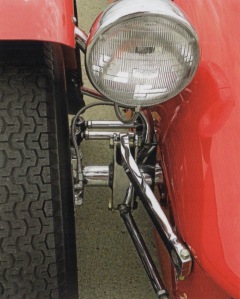 A detail of the Kurtis trailing-arm solid-axle front suspension.

“When the reconstruction of the 500S was nearing completion,” Gooding & Company continues, “Arlen’s wife, sons, and grandson took part in the final assembly. Arlen noted that ‘this car probably has more Kurtis to it than any other 500S….’ ” 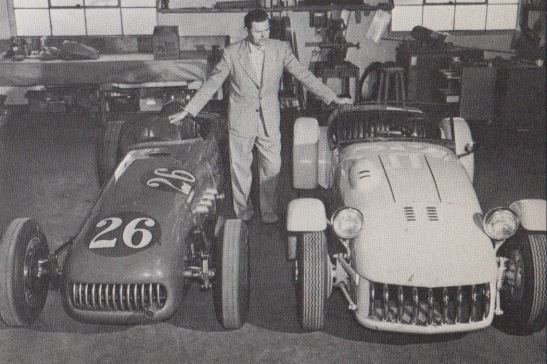 Frank Kurtis, his Indy car, and his “Sports car with the Speedway Look.”

4 comments on “THE KURTIS SPORTS CAR”