LET US celebrate the New Year with racecar noise. This celebration came to mind a couple weeks ago when I unearthed my Sgt. Peppers Lonely Hearts Club Band Beatles album for the item about Aleister Crowley.

Also found at the time were several other vinyl LPs (“what are ‘vinyl LPs,’ Grandpa?”), each celebrating racecar noise. Two historic examples follow here, as well as observations on sharing such raucous entertainment these days. 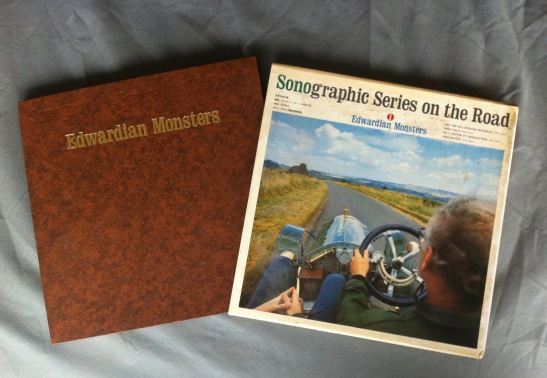 This fine art book/recording echos the style of its publisher, Car Graphic magazine, Japan’s high-end car monthly. The recording’s commentary is in English, by the British car authority Ronald Barker, 1920–2015. Text of the accompanying book is in Japanese.

Edward VII reigned in Britain for only nine years, 1901-1910, a period during which the automobile evolved from being a pure toy of the rich into something approaching everyman’s transportation. In England and on the Continent, unlike America, huge displacement of the engine gave a motor car prestige.

The Métallurgique Maybach looks at home in this setting. This, the following image, and recording excerpt from Edwardian Monsters.

This particular 1907 Belgian Métallurgique originally had a mere 10.0-liter engine, but gained its Maybach surname in 1910 with substitution of a 20.5-liter six-cylinder engine as fitted to Zeppelin airships.

Firing up a 20.5-liter engine is not for the timid, nor for the unschooled. An excerpt from Edwardian Monsters follows on MM 1907’s pre-start, starting, and operation.

The W-125 Mercedes=Benz Grand Prix car. Image by Rex Hays on the back cover of The Formula 1 Grand Prix Car. A W-125 excerpt follows.

We’re spoiled by the wonders of YouTube. One of my favorites recounts the fabulous Fiat Tipo S76, aka The Beast of Turin. Two videos linked to that SimanaitisSays item give a new meaning to internal combustion—when it’s only partially internal. And what sounds! ds