IT HAS been an interesting year here at SimanaitisSays. I’ve had a ball researching and composing items at a rate far exceeding my pre-retirement editorial activities. Here, celebrating 2017’s passage, I offer favorite highlights.

Sherlock Holmes. My enthusiasm for the world’s greatest consulting detective reached a peak in The Allegedly Sinking Parsley. My experiment to see if parsley submerges in melting butter gained a reposting at Canada’s Stratford-on-Avon Sherlock Holmes Society. 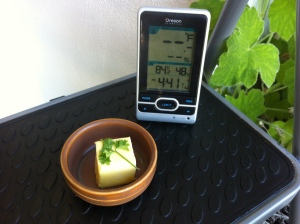 A Sherlockian experiment in progress.

I also enjoyed researching Dr. John H. Watson’s Maiwand war wound from a Jazail bullet, Was it in his shoulder or his leg?. Several conjectures exist in this regard, one of them downright odd.

Oddest items. I had the most fun in discovering Gef, the Talking Mongoose. And, yes, for more than a decade, Gef amused an Isle of Man family “with his gossip and jokes.”

I was also proud of my ancestral Lithuania and its recent attempt to Make Lithuania Great, As Usual. This time around, however, its tourist bureau’s “Real is Beautiful” campaign featured scenic pics of Finland and Slovenia. Lithuanians’ response to this, even at the government level, was priceless and a good example to us all.

Trump. This was my first year of political activism, as exemplified by my participation in April’s March for Science—Fullerton, California. Indeed, expressing political views lost the website some readers and gained it some new ones. So be it.

My favorite two analyses of Donald J. Trump are Might He Be Channeling James Joyce?? and A Mocking Apology.

In the first item, I related Trump’s articulateness in English to the stream-of-conciousness of Joyce’s Ulysses. The second one concerned the Wizard of Oz: He may be an arrogant know-it-all, a pompous buffoon, and a bully. The Wizard cavorts with evil personages, ridicules those of different body types, and surrounds himself with sycophants.

But he never once expresses lust for the child.

“Pay no attention to that man behind the curtain.”

Culture. It was curious to me that Jet Lag led to cultural riches. Three examples were offered with YouTube links: the Largo of Dvorak’s Symphony No. 9, “From the New World;” Julie Taymor’s stunning Titus, a film production of Shakepeare’s elegantly horrific Titus Andronicus; and Ettore Scola’s charming film Le Bal.

Cuisine. There’s a trifecta of food and cooking (quite distinct from Titus). I celebrated Catalan Cuisine with my own rendition of Mar i Muntanya, Sea and Mountain. I experimented with Gai Lan and Duck Bacon. And I shared lore about English Quakers and their chocolate business ventures.

Women. The year 2017 will be remembered as a Year of the Woman, and not simply because of Trump’s earlier documented locker room talk or Weinstein’s alleged despicable behavior.

SimanaitisSays offered two wonderful examples of historical womanhood. Elizabeth Chudleigh was an eighteenth-century con woman and A Genuine Piece of Work. By contrast, Katy Luther, Wife of Martin, was much more virtuous, though the tale is livened up when she escapes from a Cistercian cloister, possibly in a herring barrel.

The Russian Revolution. Today’s Russia may have returned to just another oligarchy, this time without the sanctity of a tsar. However, a century ago, its revolution had high ideals combined with terrible violence. Helen Rappaport’s Caught in the Revolution introduced me to Petrograd Nights—and Days.

Phil Jordan, valet, chauffeur, and major domo of sorts to the U.S. ambassador in Petrograd, 1917.

This book also introduced me to Phil Jordan. Jordan, an African-American, was valet, chauffeur, and major domo of sorts to the U.S. ambassador during those tumultuous days in Petrograd. Jordan’s commentaries, recorded in his letters home, are eloquent and, in a humble way, heroic.

Heroes. Celebrating All The Code Talkers discussed other U.S. heroes. Native Americans used their language skills in radio communications encoded against enemies during World Wars I and II. Their full recognition came only in this, the 21st century. As I noted, “A long time coming, yet so highly deserved.”