MAYBE A British Great War pilot was contemplating conversion of the back garden potting shed into an aeroplane hangar for his Austin Whippet. Or maybe not.

It was 1919 and Austin Motor Company was three years away from introduction of its fabled Seven motor car. The company had built aircraft under license during World War I, and the Whippet was its proposed entry into a post-war boom in civilian aviation that turned out to be at best a whimper.

As described yesterday at SimanaitisSays, the Whippet was proposed as the ideal single-seat sport plane for the post-war private owner-pilot. Indeed, the Whippet’s folding wings made it easy to tow around or store in one’s back garden shed.

According to Jane’s All The World’s Aircraft 1919, Austin assured pilots that the wings “are locked in flying position by a special positive locking device.”

Though the wings were traditionally wood-framed and fabric-covered, their streamlined struts of steel eliminated the need for wire bracing. The tailplane, elevators and rudders were also of conventional fabric-over-wood design. A feature noted in Jane’s 1919 was an adjustable tailplane “to correct centre of gravity for different weights of pilots.” We’d call this a trim control today.

Another Whippet innovation was its fuselage constructed throughout of steel tubes, thus eliminating the bracing wires that wood structures required. It too was fabric covered. 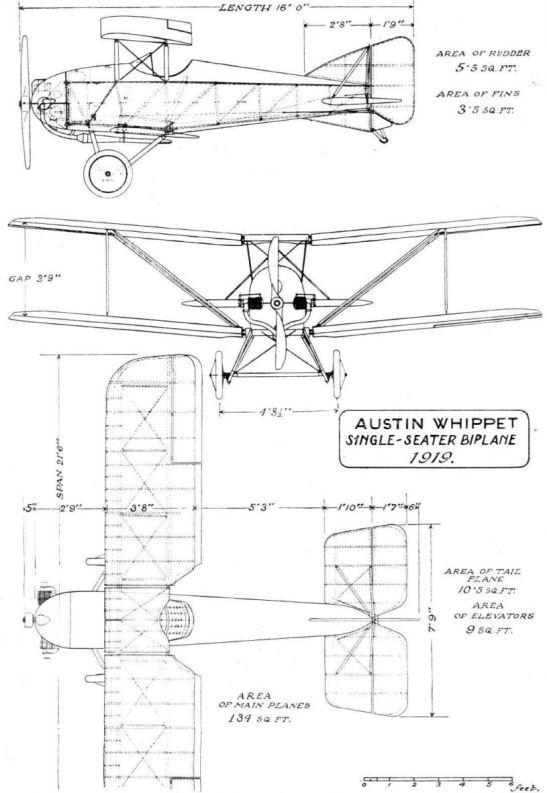 The first Whippet prototype was powered by a two-cylinder horizontally opposed engine producing 45 hp. Four rubber buffers isolated the engine from the rest of the fuselage.

The other four Whippets had six-cylinder Anzani radial power, also cited at 45 hp. A maximum speed of 95 mph was claimed. Cruising at 80 mph, the Whippet’s range was two hours flight. 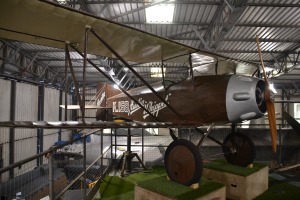 Why didn’t the Whippet catch on?

Most Brits of the era hadn’t even driven a car, let alone piloted an aeroplane. Thus, the Austin’s “owner-pilot” would have likely served in the Royal Flying Corps (a British Army branch set up in 1912), Royal Naval Air Service (established in 1914), or their combined entity, the Royal Air Force, founded in 1918 and the oldest free-standing air force in the world.

The Whippet’s demographics were hardly in its favor.

Last, there was a psychological aspect: Not unlike the mistaken expectation of a private plane boom after World War II, ex-Great War pilots were fine with giving up the cockpit.

Generally, they had had aerial adventures a’plenty to last a lifetime. Let that potential hangar in the back garden remain a potting shed. ds

2 comments on “AN AEROPLANE FOR EVERYMAN—THE AUSTIN WHIPPET, PART 2”

This entry was posted on July 11, 2017 by simanaitissays in Vintage Aero and tagged Austin Whippet, Janes All the World's Aircraft 1919, South Yorkshire Aircraft Museum.