THE AUSTIN Whippet aeroplane was going to satisfy peacetime flying urges of Britain’s Great War pilots, just as the Austin Seven motor car would fulfill road-going aspirations of the post-war British people. Indeed, the Whippet was an innovative aeroplane in 1919, just as Sir Herbert’s diminutive Seven set a standard for basic four-wheel motoring in 1922.

The Austin Seven inspired offspring all around the world. Alas, only five Whippets were ever built.

The reasons for this were partly economic, partly demographic, and partly psychological.

The Austin Seven was the Brit analog of the Ford Model T. It was motoring for the masses, Britain’s and, as it turned out, the world’s. Image from The Austin Seven, by Chris Harvey, Haynes, 1985.

Austin, established as an automaker in 1905, built aircraft during World War I under license from others. This included 1650 Royal Aircraft Factory S.E. 5a fighters, planes that became known as the Spitfires of World War I.

An Austin-built S.E. 5a. This and following images from Jane’s All The World’s Aircraft 1919, founded by Fred T. Jane, edited and complied by C.G. Grey, Arco Publishing reprint, 1969.

During this time, Austin assayed its own designs of four fighters, an observation plane, and the Whippet. None of these progressed beyond prototype stages. 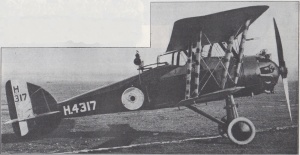 The Austin Greyhound, first flown in 1919, was a larger military sibling of the Whippet. Only three were built.

There was nothing amiss with the Whippet as an inexpensive aircraft for the private owner. Its advertisement in Jane’s All The World’s Aircraft 1919 presented an excellent case: “A single-seat biplane DESIGNED for the Owner-Pilot. Stability. Safety. Folding Planes. Luxurious Finish & Comfort. Made either as Land Machine or fitted with ‘Whippet’ floats for sea or river use.”

An ad for the Austin Whippet in Jane’s All The World’s Aircraft 1919.

Its wings (called “planes” in those days) were designed to fold back along the fuselage, where they could be locked during storage or ground movement of the aircraft. Austin data in Jane’s 1919 noted, “Wings folded, the machine can be comfortably housed in a shed 18 ft. long, 9 ft. long and 8 ft. high.”

Just the thing for one’s back garden potting shed.

This entry was posted on July 10, 2017 by simanaitissays in Vintage Aero and tagged Austin Greyhound, Austin Seven motor car, Austin Whippet, Janes All the World's Aircraft 1919.