BERNSTEIN’S WAS about average, 17 in. A jazzman’s is generally shorter. Lully perished from banging a toe with his. Wagner’s had ivory knobs. Serebrier managed to stab himself with his.

There’s plenty of musical lore concerning conductors and their batons, those innocuous little sticks used to mark time and convey nuances to the orchestra.

Indeed, batons weren’t always so little. In 709 B.C., Pherekydes of Patrae is credited with using a golden staff to earn the moniker Giver of Rhythm.

Dionysos and his pals at a gig, with his staff. Image of marble sarcophagus showing the Triumph of Dionysos and the Seasons, Roman, c. 265 A.D.

Oversize batons, even larger than what drum majors wield today, were common in the 17th century. Composer/conductor Jean-Baptiste Lully was marking time with his bâton, French for “stick,” when he struck his toe on January 8, 1687. The injury turned gangrenous, infection spread and, within three months, he was dead at age 54. 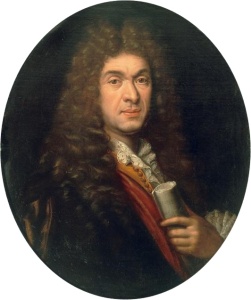 In 1810, Daniel Turk conducted the British Hallé Orchestra with such abandon that he occasionally hit the chandelier above his head and showered himself with glass bits.

Richard Wagner was Royal Saxon Court Conductor in Dresden, 1842–1849. Fabricated at his behest was a baton of ebony with ivory knobs at both ends. Apparently it was held in the center and manipulated swagger-style. No surprise, this. 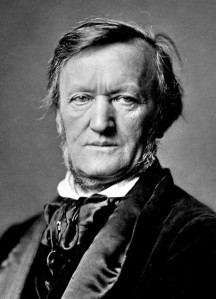 Richard Wagner, 1813–1883, German composer and theater director, especially of his own operas including The Ring of the Nibelung.

Today’s classical batons vary in length from around 12 to 26 in. Conductors of jazz bands tend to prefer short ones, typically six to nine inches in length. Batons are generally made of lightweight wood with a comfortable cork grip—the conductor, after all, might be waving the thing for hours at end.

Leonard Bernstein said, “If one uses a baton, the baton itself must be a living thing, charged with a kind of electricity, which makes it an instrument of meaning in its tiniest movement.”

Not all conductors choose to use batons. For example, Maestro James Levine typically uses solely his two hands, most expressively, in conducting Metropolitan Opera performances. Leopold Stokowski was another who chose to conduct sans baton.

A discussion of batons would be incomplete without celebrating Richard Horowitz, the late principal timpanist of the Metropolitan Opera Orchestra. In his November 11, 2015, obituary, The New York Times called Horowitz a “craftsman of conductors’ batons, a fine trade plied by only a handful of people around the globe.” 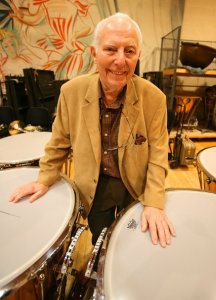 Richard Horowitz, 1924-2015, principal timpanist of the Metropolitan Opera Orchestra. He performed at the Met from 1946 to 2012. Horowitz is famed as well for fabricating batons for many conductors. Image by Marilynn K. Yee, The New York Times, 2008.

“Mr. Horowitz made his first baton, quite by accident, in the mid-1960s,” The New York Times reported, “after [Maestro Karl] Böhm broke one and… was told that none like it existed. Always good with his hands, Mr. Horowitz took the baton… and emerged with such a faithful copy that his second career was born.”

Conductors wielding Horowitz batons included Leonard Bernstein, Colin Davis, Christoph con Dohnanyi and Erich Leinsdorf. Indeed, The New York Times reported that Bernstein was so devoted to his Horowitz batons that he was buried with one.

Horowitz told New York magazine in 1979, “I remember making some batons for José Serebrier, and the next week I read in the paper that he was conducting in Mexico and had stabbed himself with a baton. I thought, ‘Oh, my God, here comes a lawsuit or something.’ But when he got back, he told me it wasn’t one of my batons. It was some cheap plastic thing that broke…. I felt much better about it all.”