TALES OF NARCISSUS AND OF MACHIAVELLI

WHATEVER PROMPTED me yesterday to research the Greek myth of Narcissus and Italian Niccolò Machiavelli’s treatise The Prince?

Narcissus, an elegantly coiffed guy who falls in love with himself. Image by Caravaggio, c. 1594.

Ovid, 43 B.C.–17 A.D., wrote about the Greek myth of Narcissus and Echo; she, a mountain nymph attracted to him. Echo stalks him and Narcissus calls out, “Who’s there?” More likely, he said “Ποιος είναι εκεί?” but, as in today’s films we assume everyone is speaking English.

Echo isn’t much for original chitchat, which may explain why she can’t attract a guy. Image by Alexandre Cabanel, 1873.

Echo repeats only, “Ποιος είναι εκεί?” But Narcissus doesn’t even invite her to stay with him. She is heartbroken and spends the rest of her life in lonely glens… or is that canyons of steel? 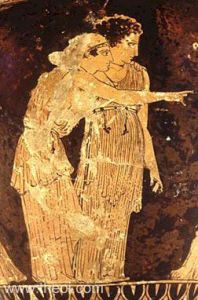 Nemesis is the Greek goddess of indignation and gains revenge for Echo’s isolation. According to the Theoi website, Nemesis got even with “those who committed crimes with apparent impunity, or who had inordinate good fortune.” Her name derives from her being the dispenser of dues.

Nemesis lures Narcissus to a pool, where he is fatally entranced by his own image. For once, dues paid in full.

It’s not certain there’s any link between Narcissus the guy and narcissus the perennial of the amaryllis family. Pliny the Elder wrote that the plant was named not for the guy, but for its flower’s fragrance (ναρκάω narkao, “I grow numb”). By the way, the word “narcotics” has the same root.

Today, in psychology, narcissism is “extreme selfishness, with a grandiose view of one’s own talents and a craving for admiration, as characterizing a personality type.”

Beginning in 1968, the American Psychiatric Association has included Narcissistic Personality Disorder in its Diagnostic and Statistical [you’ll excuse the mathematical term] Manual of Mental Disorders. The Millon Clinical Multiaxial Inventory includes narcissism as a social or cultural disorder. It’s one of the three Dark Triad in psychology: narcissism, Machiavellianism and psychopathy. 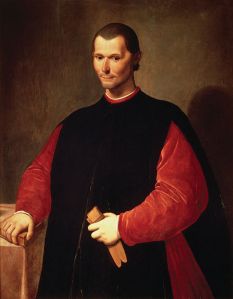 Niccolò Machiavelli wrote about cunning and duplicity in statecraft and general conduct. His book Il Principe, the Prince, was published in 1532, sort of a 16th-century The Art of the Deal. 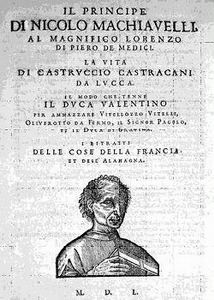 A central theme of Machiavelli’s work is that important aims, such as glory and survival, can justify immoral means to achieve them. Leo Strauss wrote in his 1995 Thoughts on Machiavelli

that the Italian proposed “a politics guided exclusively by considerations of expediency, which uses all means, fair or foul, iron or poison, for achieving its ends….”

Twentieth-century American mobsters were known to consider Machiavelli’s The Prince as a Mafia Bible.

Others have a different view of Machiavelli. Noted one scholar, “The book is, first and foremost, a satire, so that many of the things we find in it which are morally absurd, specious, and contradictory, are there quite deliberately in order to ridicule….”

Sort of a 16th-century SNL.

There. My curiosity is satisfied. ds

2 comments on “TALES OF NARCISSUS AND OF MACHIAVELLI”

This entry was posted on April 30, 2017 by simanaitissays in And Furthermore... and tagged Echo, Narcissus, Nemesis, Niccolo Machiavelli "The Prince".