THIS ALL STARTED with Wife Dottie and Panaramus, her childhood pet lamb, who climbed the hay bale stack with her and the dogs. Years later, Wife Dottie learned the art of weaving from two talented Orange County, California, weavers, Esther and Gertie. For years, her Harrisville floor loom occupied center stage in our living room, my learning to help “keeping the cross,” the intricate arranging of yarn in dressing a loom.

My other activity was contributing to our flock of miniature sheep, a collection that grew with our world travels. Today, the flock resides in the highlands of one bookcase, where the sheep share shelves with weaving books. 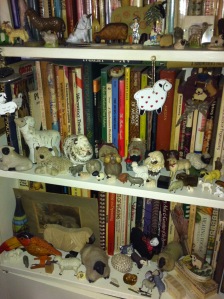 Like any dutiful shepherds, we have a tale about each member of our flock. I recount several of them here. 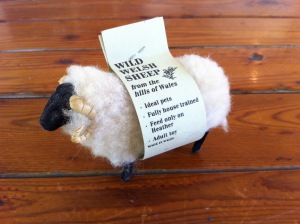 On a British trip, Wife Dottie and I visited Wales with our adventure on the Llongollen Canal recounted here at SimanaitisSays in ”Pontcysyllte: A Welsh Wonder. This Wild Welsh Sheep came clothed in helpful instructions. 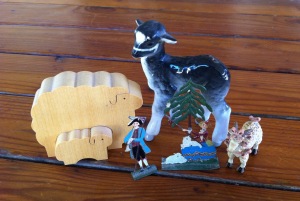 Other members of the flock: American, German, English and Russian.

The sweet mother and nested lamb came from a craft fair here in California. The horn player and his lady are German, part of a larger tintype collection. The pink-festooned sheep rolls on tiny wheels and came from a London flea market. The gentle ceramic lamb carries a tattoo “Made in USSR.” It latched onto me when I visited Leningrad on my Baltic tour in 1990. With the crumbling of the USSR, the city’s name officially reverted to St. Petersburg a year later. 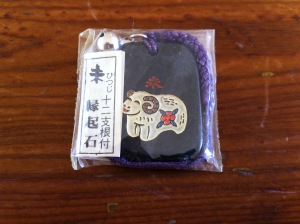 A zodiac sheep from Japan.

Japan’s Junishi zodiac calendar was inherited from China, as were many characters of written Japanese. The sheep, hitsuji in Japanese, is one of the 12-year cycle of rat, bull, tiger, rabbit, dragon, snake, horse, sheep, monkey, rooster, dog and boar.

Last year was Year of the Sheep. According to japanese.about.com, those born in the Year of the Sheep are “elegant, highly accomplished in the arts and passionate about nature. At first glance, they seem to be better off than the people born in other years.” And, indeed, our little hitsuji appears a bit self-satisfied, doesn’t she? 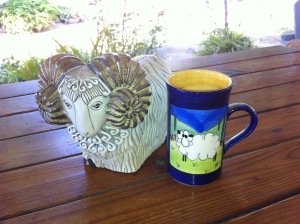 An international pair from Uruguay and New Zealand. Guess which is which.

Neither Wife Dottie nor I have ever been to Uruguay, though she has a friend from there. The large ceramic ram with gold horns is identified as being hand-made in this South American country, number 791 of a flock of 2000.

I’ve been to New Zealand twice and met lovely people there each time. They take no umbrage whatsoever in hearing that the country has more sheep than people. In fact, with neat sheep such as this one, who would? 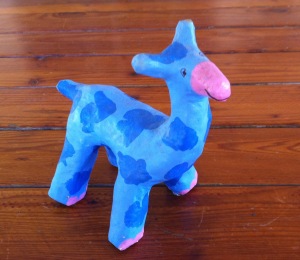 This last example in our flock, of painted papier-mâché, has unknown heritage. I recall being taken by his smile and packing him carefully in luggage for the trip home. But what’s his place of origin? Candidates include South Africa, the South of France and possibly south Jersey.

In fact, Wife Dottie and I aren’t even sure he’s a sheep. However, he gets along just fine with the rest of the flock. ds

This entry was posted on September 17, 2016 by simanaitissays in And Furthermore... and tagged flock of sheep, sheep collection.