AS HURRICANE HERMINE moves her way up the Atlantic coast of the U.S., I’m reminded of 1961’s Hurricane Esther and my own drenching from her. The experience enabled me deftly to tie a bowtie and also to resist sophomoric hazing.

A satellite image, the first of its kind, of Hurricane Esther, September 1961. This and following images from wikipedia.org.

Hurricane Esther had the distinction of being the first large tropical cyclone to be discovered by satellite imagery. It originated off Africa in the vicinity of the Cape Verde Islands, then moved northwest across the Atlantic to loop upward along the East Coast.

Another map is illustrative of Esther’s effect on my life. Worcester, Massachusetts, is about 40 miles west of Boston. And if you examine an Esther rain-intensity map, you see an orange portion almost a bullseye over Worcester.

“Founded on a peddler’s dream in 1865,” Worcester Poly had a rich tradition when I arrived in the Class of 1965. One of these traditions, both good and inane, was freshman hazing.

Freshmen (in those days at WPI, specifically of that gender) were required to wear cardboard signs, 8 x 12 inches, front and back, showing name and hometown. WPI’s version of “Hello, I’m ____,” it was a quick way for the freshmen to get to know each other, and for upperclassmen and faculty to get to know them as well.

Along with the sign, another requirement was to wear a maroon-and-gray bowtie and WPI beanie. What’s more, the bowtie had to be of the traditional tie-it-yourself variety, not a clip-on.

Then came the hazing, a sophomoric aspect in more ways than one. Any sophomore was permitted, no, make that encouraged, to accost a freshman and question the efficacy of his bow-tying skill.

“Ah, Mr. …, How do you pronounce that? Your bowtie appears to me to look a bit unbalanced. Tsk…tsk…,” as he pulled my tie loose.

Then, with him watching carefully, I had to retie it to his satisfaction, all the while as I worried about getting to my next class on time.

Another WPI tradition ensured that these sophomores, no doubt petulant about their own freshman experience, had no lack of freshmen to haze.
WPI’s campus is divided by Worcester’s West Street, low-traffic on campus though avoidable completely in mid-campus by the Earle Bridge. 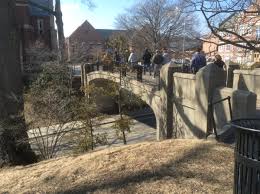 The Earle Bridge across West Street.

Needless to say, the hazed freshmen were prohibited from walking across West Street, and the narrow bridge became prime territory for hazing.

Unknown to us freshmen, the faculty expected this hazing to have another beneficial effect: Eventually, leaders of the freshman class would materialize and resist matters. Then, by mutual consent, this nonsense would cease.

Worcester’s 8.01 to 9.0 inches of rainfall turned freshman signboards into mush. And bowties resided deep beneath buttoned-up raingear. After a couple days, tor the first time apparently in almost 100 years, WPI administrators declared that freshman hazing had an early termination.

And, just prior to this announcement, a bunch of us brazenly marched up West Street, our WPI beanies tossed in the air and bowties undone. (Yes, we were regular radicals in our day.)

My modest contribution to this march was to inaugurate the Worcester Polytechnic Institute cheer:

This entry was posted on September 4, 2016 by simanaitissays in And Furthermore... and tagged freshman hazing at WPI, Hurricane Esther 1961, Worcester Polytechnic Institute.