THE FOKKER EINDECKER changed the tactics of aerial combat midway through World War I. Aeroplanes were initially used exclusively for observation, until an observer took a potshot at an enemy adversary doing similar snooping from the air. This quickly accelerated (or degenerated) into fitting machine guns onto aircraft for dedicated aerial combat.

Some of these guns were aimed and fired by the observer, apparently it being his responsibility not to shoot off bits of his own aircraft. Another option was to mount the machine gun on a biplane’s upper wing so it could be pointed straight ahead and fired over the spinning propeller. A third option gave the pilot the best possible aim by mounting the machine gun directly ahead of him and allowing him, in a sense, to aim the entire aircraft toward the target.

Lamentably, until the summer of 1915, this option had the machine gun firing into the arc of the spinning propeller with the prop armored to deflect bullets that inappropriately encountered its rotation.

Aircraft manufacturer Tony Fokker was given responsibility of bettering the odds when firing a machine gun directly toward a spinning prop. He and colleague Heinrich Luebbe, perhaps cognizant of an earlier idea of Franz Schneider, devised a cam-and-pushrod mechanism linking the engine’s oil pump (which pulsated in direct relation to engine rotation) and the machine gun trigger.

The pilot could therefore shoot at will, with some confidence this mechanical interrupter would function correctly.

The Fokker Eindecker (one-winger) was the first aircraft to employ such synchronized firing of its forward-facing armament and was successful indeed: It became known as the Fokker Scourge; its victims, Fokker Fodder.

Apart from its synchronized armament and being a monoplane, the Eindecker was relatively orthodox. For example, it retained traditional wing warping in lieu of ailerons for lateral control. Its powerplant was a rotary, the block and cylinders rotating with the prop. Early Eindecker E I variants had Oberursel seven-cylinder power; E II and E III versions had nine-cylinder Oberursels.

The E III Eindecker had a top speed of around 85 mph. Its 19 gallons of fuel (and 4 gallons of oil!) gave an operational range of as long as 2 hours 45 minutes.

Most Eindeckers were fitted with a single Spandau machine gun, but some carried two.

The wing and tail structures of an Eindecker were made of ash, pine and poplar. Wing warping depended upon enclosed steel tubular struts linked by ball-and-socket fittings to lateral cables. There was no fixed horizontal stabilizer nor vertical fin; the complete tail surfaces moved. A “comma” rudder was characteristic of Fokker designs.

The Eindecker fuselage was fabricated from welded steel tube. With the exception of a forward metal cowling, this fuselage, the wing and tail surfaces were fabric-covered. 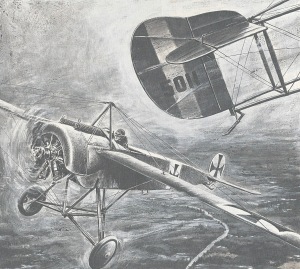 An Eindecker engaged in combat, as envisioned in Conquerors of the Air: The Evolution of Aircraft 1903-1945, illustrated by Carlos Demand, text by Heimer Ende, Edita S.A. Lausanne, 1968.

Overall, the Eindecker design paid homage to a French Moraine monoplane that had fallen into German hands in early 1915. The Moraine, flown by Lieutenant Roland Garros, also had forward-firing armament, but depended on an armored propeller.

Eindeckers entered the conflict in the late summer of 1915. Among their pilots was WWI ace Max Immelmann. His name is associated with the Immelmann Turn, a half-loop/half-roll that ends with the aircraft flying in the opposite direction, often at a higher altitude.

Within a year, the Eindecker was rendered obsolete by faster and more maneuverable French and British craft. However, the tactics encouraged by its synchronized forward-firing armament forever changed aerial warfare. ds