ALTHOUGH I CANNOT find it, both Wife Dottie and I remember a cartoon showing a guy lazily leaned back in his office chair, his feet on an uncluttered cob-webby desk, the caption, “Another busy day at the National Okra Appreciation Council.”

However, I beg to differ about its sentiment. Okra is one of our family favorites. Today’s topic at SimanaitisSays is red okra, new to me and demanding some research. 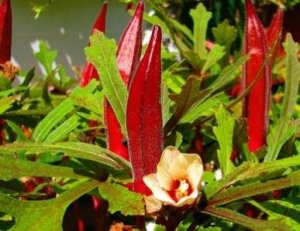 A red variety of okra was developed in 1988 at Clemson University, an institution renowned for its okra variants. Okra is a member of the mallow family, along with hollyhock, cotton, cacao and hibiscus. Yummy, beautiful and useful kin. And okra is nutritious, offering a goodly bit of vitamin C, fiber, magnesium, calcium, potassium and antioxidants.

Okra may have originated in South Asia, Ethiopia or West Africa. In various Bantu languages of Africa, its edible green pods are known as (ki)ngombo, possibly originating the word “gumbo.” Others suggest the Native American Choctaw word for filé, kombo, as the source for naming the tasty Southern stew.

In some English-speaking countries, okra is known as “ladies’ fingers.” To some people, a tendency of okra to be slimy gives it a reputation of inedibility. If you can believe it, one source says the water of excessive rinsing causes this mucilage. Others suggest that the slime factor is reduced by quick stir-frying or slow stewing.

On the other hand, in Malawi, formerly Nyasaland, okra is preferred to be stirred with baking soda to thicken its goo. Chacun à son goût.

Hoping to translate this phrase into Malawian, I looked up this southeast African country. However, I mistyped Mawali—and got a real eyeful.

Mawālī is the plural of mawlā, the Arabic word for converts to Islam. Though the Quran gives them equal status with those born into the faith, mawālī lack Arabic tribal ties, apparently a big deal.

What’s more, according to urbandictionary.com, mawali is Hindi/Urdu pejorative slang for the lowest class of male street ruffians. “They wear flashy clothes, sport oily hair almost dripping into the atmosphere, annoy visual senses with their trademark red-toothed smile (acquired through years of betel-nut chewing…” and worse.

Ain’t mistyping fun? By the way, Malawi’s official language is English. Thus: “Each to one’s own taste.” 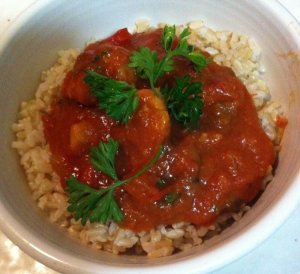 My gumbo, with recipe offered.

Okra, red or green, is great in gumbo. But its quickest, easiest preparation is fried okra. Wife Dottie taught me this traditional southern sauté technique. I’ve fooled with it a little to my taste. 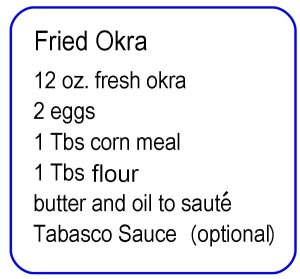 Covering all my culinary bets, I don’t overwash the fresh okra, just vigorously swish it around in water and drain. Some recipes recommend thin slices; I prefer those of 1/2-inch or so. 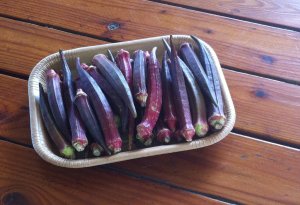 Two eggs, stirred. Add a generous tablespoon of corn meal and a tablespoon of flour. Stir this into a batter; expect it to be a bit grainy from the corn meal. Mix in the sliced okra. 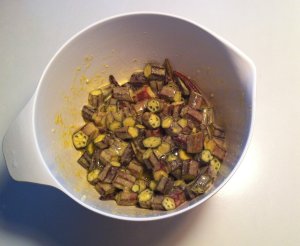 Heat oil and butter in a skillet large enough to hold everything in a single layer. Once the butter starts to foam, spread out the okra and let it brown ever so slightly. Flip it over; don’t worry when it breaks into pieces. 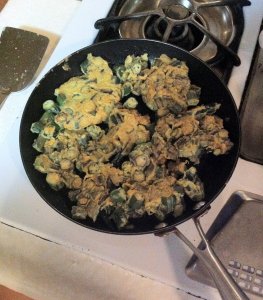 Cook the other side until lightly brown. By the way, as it cooks the red okra turns green. (I didn’t know this when I bought it.) 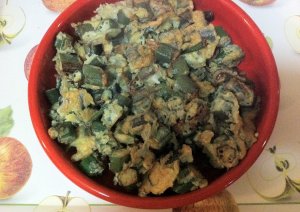 We serve ours with Tabasco. I like it hot; Wife Dottie has more refined tastes. Bon appétit! ds

This entry was posted on June 28, 2016 by simanaitissays in And Furthermore... and tagged Clemson University okra, Fried Okra recipe, gumbo, Malawi the country, Mawali a term in Arabic and also Hindi/Urdu, Red Burgundy okra.