FROM LENINGRAD WITH LOVE, OR AT LEAST WITH DIALECTICAL MATERIALISM

GUIDEBOOKS CAN provide more than details of locale; they may also offer directions to thought. Certainly my Leningrad Guide, 1930, is such an example. Published within two decades of the Russian Revolution, the book acknowledges this city’s historic (and retrospectively modern) name of Sankt-Pitersburkh/Petrograd/St. Petersburg. But in no uncertain terms, the guide also pays homage to V.I. Lenin: Five days after his death on January 21, 1924, the city became Leningrad. 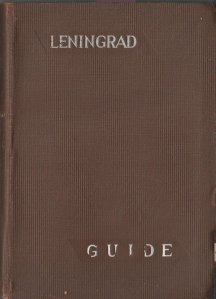 Leningrad: A Guide to the City and its Suburbs, published by the Leningrad Executive Committee and Leningrad Soviet, 1930.

Its opening line: “The ever increasing interest of West-European countries and America in the Soviet Union and in the socialist construction which is being realized in it with so great a success may clearly be seen from the rapidly growing number of foreign tourists and delegations that visit the USSR.”

Strident bits of dialectical materialism recur throughout the guide. But there were also a citation of a Shostakovich opera I’ve enjoyed and a mention of the city’s Hermitage, a decidedly non-Soviet edifice and setting of a latter-day film masterpiece.

The guide’s view On Labour and State Social Service: “The ‘free’ capitalist countries, well informed as to the actual conditions of labour in the Union, have recently stated a new campaign of slander and hatred against the USSR, charging it with exploiting forced labour.”

The guide claims otherwise: “… the heroic perseverance of the Russian proletariat cannot but terrify the bourgeoisie and all its agents….”

Take that, you Baedecker’s readers! 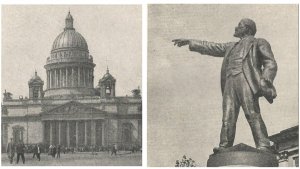 At left, “St. Isaac’s Cathedral, now the Antireligious Museum.” At right, V.I. Lenin. These and other images from Leningrad Guide.

The section On the Museums of Leningrad continues this anti-capitalist theme: “Each museum must have its own strictly defined body of aims in order to introduce coordination and avoid unhealthy competition in the choice of materials by the different museums.”

On the other hand, the State Hermitage is praised as “an outstanding collection of antiquities and works of art of all periods and nationalities.” Wife Dottie remembers her visit to the Hermitage 37 years ago. Its Malachite Room contains columns, fireplace and other objects of this semiprecious stone. The Malachite Living Room is paneled with it. 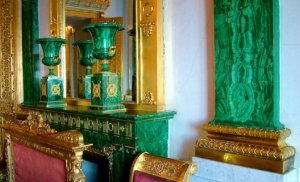 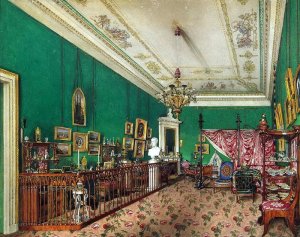 Other wonders of the Winter Palace can be viewed in Alexander Sokurov’s marvelous 2002 film, Russian Ark. This film is renowned for being shot in a single sequence, with its narrator wandering through the Winter Palace—and through time—as he encounters various periods of the city’s 300-year history. 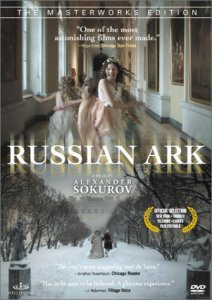 The film takes place in 33 rooms of the Hermitage. A cast of more than 2000 actors was bussed from location to location to satisfy requirements of its continuous shooting. Three orchestras were used, including one conducted by Valery Gergiev. 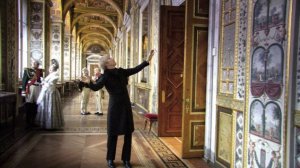 YouTube offers a Russian Ark trailer. [This link proved pesky on my mobile, but worked after a couple tries.]

A bit of personal trivia: Post-production of Russian Ark used software from Discreet Logic. One of this company’s other products is 3ds Max; its scaled-down GMax version is the free software used in my computer flight sim aircraft modeling. 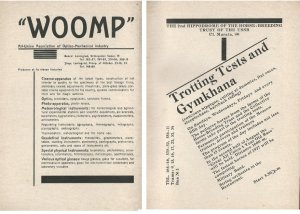 From the guide: Ads for the All-Union of Optico-Mechanical Industry and an upcoming horse show.

In the guide’s Theatre section, Leningrad notes “The State Great Playhouse … was founded in 1919 as a theatre of classic tragedy, romantic drama and high class comedy and originally its repertory consisted of Shakespeare’s, Schiller’s and Molière’s works…. Having gone through a lasting evolution, it has been lately taking up only Soviet dramaturgy.”

These include Khleb (Bread) and Linia Ognia (Line of Fire), both noted as “plays of exceedingly acute modern thematics.”

On the other hand, the guide also mentions “The Theatre of the Opera and Ballet (Teatraiaia pl.), which was the Imperial Mariinsky Theatre before the Revolution.” In fact, its name had reverted to the Mariinsky at the time of my 1990 visit. 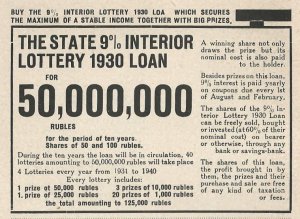 Another diversion advertised in the guide.

Citing operas of Soviet composers staged at the Minor Opera House (previously/currently, the Mikhaylovsky Theatre), the guide mentions Dmitri Shostakovich’s The Nose as a “most interesting” piece.

This satirical opera is based on an 1836 short story by Nikolai Gogol. And, indeed, a main character of The Nose is a bureaucrat’s nose that leaves his face and develops a life of its own. The opera had its premiere in January 1930. After receiving lackluster reviews and baffling everyone, The Nose was not performed again in the Soviet Union until 1974. 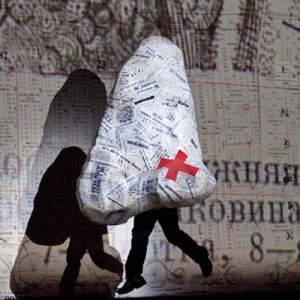 Daughter Suz and I enjoyed The Nose as part of The Metropolitan Opera Live in HD Series in its 2013 – 2014 season. It’s a real romp. And, perhaps reflecting Shostakovich’s complex relationship with Soviet authorities, neither Daughter Suz nor I acquired any dialectical materialism out of it. ds

One comment on “FROM LENINGRAD WITH LOVE, OR AT LEAST WITH DIALECTICAL MATERIALISM”