QUICK, LIST CARS named for planets in our Solar System. If you like, include the Uranus even though it’s a fictional marque from the Grand Theft Auto video game.

Next, cross out the ones that have never competed at Le Mans. Goodbye, Mercury. So long, Saturn. Delete Uranus.

Yep. The Jowett Jupiter. To the best of my knowledge, among Le Mans entrants it’s unique in having a planetary moniker. Maybe you can think of another?

What’s more, the Jupiter and its Javelin sedan sibling were more than just entrants in international competition. They were class winners at venues such as Le Mans, the Spa 24-hour and the Monte Carlo Rally. Yet, this British car company, in business 1906 -1954, had a much different heritage.

D.B. Tubbs describes Jowett’s modest sportiness pretensions in “The Jowett Javelin and Jupiter,” Classic Car Profiles 1-24: “There is something very J.B. Priestley about the Jowett tale of a staid cloth-capped Yorkshire firm making penny-a-mile motors that suddenly decides in late middle age to go in for export drives and a racing programme.” 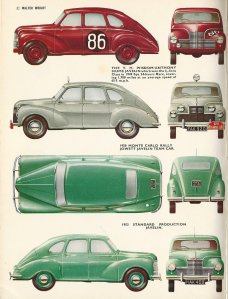 Jowett Javelin, the Jupiter’s sedan sibling, built 1947 – 1953. This and the following images from Classic Cars in Profile Volume 1: Profiles Nos. 1-24.

Not that the Jowett cars of post-World War II weren’t state of the art. The Javelin sedan made its debut in 1946 with a unibody of pressed steel, aerodynamic styling and torsion-bar suspension. Its engine was a 1486-cc flat four with overhead valves, akin to the Volkswagen Beetle’s, but with a front-mounted water-cooled aluminum block rather than the VW’s rear-mounted air-cooled magnesium counterpart.

A Javelin won its class in the 1949 24-hour race at Spa. This was after an earlier class win in that year’s Monte Carlo Rally.

Though the Javelin had an only modest top speed of 82 mph, its road manners yielded a 65.5-mph average over 1700 miles in its class win at the 1949 Spa 24 hour. As late as 1953, a Javelin in privateer hands scored an outright win in that year’s International Tulip Rally in the Netherlands.

The Jupiter chassis, designed by Robert Eberan von Eberhorst. Noteworthy are its cruciform bracing and the low-mounted flat four ahead of the radiator.

In the late 1940s, what with M.G. T.C. export sales thriving, Jowett responded with the Jupiter, a sports car version of its already successful Javelin. The company persuaded German engineer Robert Eberan von Eberhorst to come to England and participate in its design. Eberhorst’s expertise was already evident in the pre-war Auto Union Type D racing car and post-war Porsche 356. Later, he was responsible for Aston Martin’s DB3.

The Jupiter made its debut at the London Motor Show, October 1949. For Le Mans in 1950, the company replaced the bench seat of an essentially stock Jupiter with a single bucket seat. This car ran trouble-free for 24 hours and won its 1.5-liter class with a record 75.84-mph average. A contemporary road test in The Motor indicated once again a Jowett’s handling prowess: Its top speed was 88 mph.

Other competition successes included 1-2 in class in the 1951 Monte Carlo Rally, another 1-2 class win at Northern Ireland’s Dundrod circuit, a class win at Le Mans and an outright win in the Lisbon International Rally that same year. Yet another class win at the 1952 Le Mans followed, however technology was catching up to what was essentially a rebodied sedan.

A Jupiter at the 1951 R.A.C. Tourist Trophy on the Dundrod circuit in Ulster. The two entries came 1-2 in class.

Jowett assessed new designs, but unsuccessfully. In 1954, the works were sold to International Harvester for production of its B-250 diesel tractors.

Jupiters made their way to the United States. An SAE colleague raced one in the 1950s. Wife Dottie remembers riding in another owned by the R&T publisher’s secretary. I’ve seen two of them contesting regularly at the Monterey Historics.

I like to think the Yorkshire firm has its cloth cap on sportingly back-to-front. ds