IN A SEARCH for elegance in mathematics, look no further than Euler’s Formula, e i π = -1. This equation takes three perhaps obscure mathematical constants, e, i and π, and arranges them to produce a more familiar number, albeit one with negative value.

It’s a conjurer’s trick: Put three mysterious objects into a top hat—and pull out a dove that gracefully flies off.

What’s more, and a fascinating part, Euler’s Formula can be demonstrated to one and all with no more sleight of hand than appealing to a mathematical concept called a Taylor series.

The basics. We do groundwork first, and then a rigorous mathematical proof.

The imaginary number i got brief mention in “Computing with Quanta.” By definition, it has the curious property that i2 = -1. This sets it apart from non-imaginary numbers, whose squares are always positive (i.e., -2 x -2 = 4).

Numbers of the form a + bi can be graphed in a mathematical object called the complex plane, with the “a” value measured on the horizontal (real) axis and “b” on the vertical (imaginary) axis. Complex numbers have lots of applications, among them in physics, flow dynamics and electrical engineering.

Like π, the number e is transcendental. Loosely, there’s no ordinary polynomial equation for which e is a root. One implication of this is that e has an infinite, non-repeating decimal representation. Approximately, e = 2.718. And, as with π, there’s mathematical interest in extending e’s decimal representation; it has been approximated to more than 800 million places already.

In general, logarithmic representations replace multiplication with addition. (See “What’s a slide rule, Grandpa?” for why logarithms are useful; also, how to promote a snake population.)

Taylor series. The number e can be approximated closer and closer by calculating more and more terms of a particular infinite series, one of a family of mathematic objects known as Taylor series. 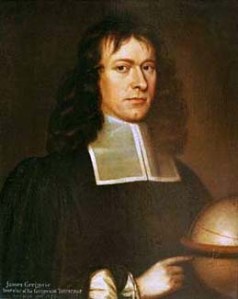 Taylor gets the name, but James Gregory deserves credit as well. Gregory was a Scottish mathematician, a contemporary of Isaac Newton. Newton shares credit with German Gottfried Wilhelm Leibnitz for development of calculus, the mathematics of change.

It was Gregory who gave the first published proof of the Fundamental Theorem of Calculus connecting its two basic concepts, the slope of a curve and the area under it. He also used these fledgling calculus techniques to show that several mathematical expressions could be represented by infinite sums of terms.

Euler’s Formula. Euler (pronounced “oiler,” as in ë) has made several appearances at SimanaitisSays. He was the star of “Networking Along Königsberg’s Seven Bridges.” I also like his portrait as it appears on the Swiss 10-franc note.

Hence (you see my hands never leave my wrists…), the Taylor series for e ix is the same as that for cos x + i sin x.

Q.E.D. Latin for quod erat demonstrandum, that which was to be demonstrated. Our proof is completed.

What use is Euler’s Formula?

What use is Botticelli’s The Birth of Venus? Its existence is justification enough. ds