FRIEDRICH KARL Baron Koenig von und zu Warthausen was keen on winning the Hindenburg Cup in 1928. Established that year by President Paul von Hindenburg of the German Weimar Republic, the award was to honor sportive flight by an amateur pilot. The cup was accompanied by a prize of 10,000 Reichsmarks, worth around $2400 ($33,000 in today’s dollars) back before inflation devastated Germany’s currency. 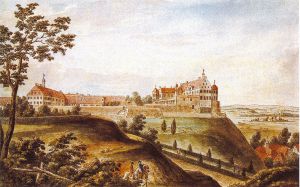 The money didn’t matter to the young baron. He had been born in 1906 in Schloss Warthausen, a palatial estate rebuilt several times since 1168 and owned by his family since 1829. When Friedrich Karl earned his pilot’s license, his parents bought him an airplane, a Klemm L.20B. He was 22 and had required only 12 hours of instruction.

Friedrich Karl and his Klemm L.20B D-1433. This and other images from Flug um die Welt.

The aircraft, registered D-1433, is a sweet little two-seat low-wing monoplane, empty weight less than 600 lb. and powered by a two-cylinder 885-cc Daimler-Benz producing perhaps 20 hp. Today D-1433 resides among the exhibits of the Daimler-Benz Museum in Stuttgart.

D-1433 soars above Mercedes-Benz cars in Stuttgart. Image from ubi.com.

The Klemm’s air-cooled powerplant, designed by no less than Ferdinand Porsche, has its two cylinders opposed, boxer fashion. It propelled the L.20 to a maximum speed of 65 mph.

“With 20 hp around the world!” Friedrich Karl and his Klemm’s powerplant represent “rock-solid trust in Mercedes-Benz Quality.”

Friedrich Karl figured a solo non-stop from Berlin to Moscow, 1000 air miles, would put him in the running for the cup. At 11 p.m. on August 9, 1928, he took off from Berlin Tempelhof Airport, destined two decades later to make history in the Berlin Airlift. Sixteen hours later, weather forced him to land, only 30 miles from his destination. The next morning, he continued on to Moscow’s Khodynka Aerodrome.

But this was only the beginning of Friedrich Karl’s adventures. After a few days, he and his Klemm, nicknamed Komerade, took off from Moscow and headed south-east across the Caucasus Mountains. He landed in Baku, Azerbaijan, then on to Persia , where he met the Shah. Stop-overs in Persia (its historic name Iran returning in 1935) included Pahlevi, Tehran, Isfahan, Shiraz and Bushehr on the Persian Gulf.

Friedrich Karl and his Klemm.

In Bushehr, Friedrich Karl received word that he had been awarded the 1928 Hindenburg Cup. There he also met Ehrenfried Günther Baron von Hünefeld, a fellow aviator and German nobleman intent on an around-the-world trip. Friedrich Karl didn’t decide on his own circumnavigation until later.

He continued on toward India with his last stop in Persia at Bandar-Abbas. His route took him to Karachi, back then still part of India, Nasirabad, Agra (to visit the Taj Mahal), Allahabad and Gaya, finally reaching Calcutta on Christmas Eve, 1928.

Friedrich Karl hung out there for two months of sight-seeing and hunting, a sidetrip to Tibet and a meeting with Mahatma Gandhi. He left India on February 5, 1929, and traveled to Akyab and Rangoon, Burma, before monsoon rains delayed him for 10 days in Bangkok, Siam.

The wife of Prajadhipok, King of Siam, gifted Friedrich Karl with a Siamese cat, who accompanied him for the rest of his journey. Another tropical storm stranded him, his Klemm and new pal “Tanim” in Singapore for three weeks.

There, Friedrich Karl decided to cancel a westward return home, and established a paradigm for the rest of his world tour: He, Tanim and the Klemm would travel by boat over the boring bits, but continue by air across land masses: Shipboard to Shanghai, a flight to Nanking, ship to Kobe, Japan, another ship across the Pacific, then fly the American continent from San Francisco.

The Klemm gets an honorific nickname, Huenefeld.

While in San Francisco, Friedrich Karl learned of the deaths of Baron von Hünefeld and his copilot. In their memory, Koenig added the nickname Huenefeld to the side of his Klemm before leaving on June 8, 1929, for Los Angeles, where he met film impresario Carl Laemmle.

Tucson Star, July 8, 1929. This and the following image from Davis-Monthan Aviation Field Register.

San Diego, Tucson, El Paso, where Friedrich Karl encountered his sole injury of his travels: A car collided with the taxi taking him back to the airport. He suffered a concussion and a seriously injured leg that required two months of recuperation. Then, landing in Sweetwater, Texas, the Klemm nosed over and required transport to Dallas for repair.

Prior to boarding the SS Bremen for transatlantic passage, Friedrich Karl had a visit to Washington, D.C., and met his hero, Charles Lindbergh (whose historical flight was only two and a half years before). 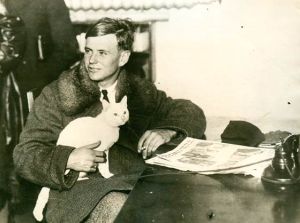 From Bremerhaven, Friedrich Karl, Tanim and the Klemm encountered thick fog that brought their adventure to an end at Hanover on November 23, 1929. Friedrich Karl had flown 450 hours and traveled 20,000 miles over a total of 15 months. In Berlin, the president was finally able to present the baron with his 1928 Hindenburg Cup.

This entry was posted on January 27, 2016 by simanaitissays in Vintage Aero and tagged around the world by plane 1928, Friedrich Karl Baron Koenig von und zu Warthausen, Klemm L.20B.