SIX ON THE ROOF

THEY WERE known as “Les Six,” a sextet of French composers who enlivened Paris in the 1920s with their antics and their avant garde music. Georges Auric, Louis Durey, Arthur Honegger, Darius Milhaud, Francis Poulenc and one woman, Germaine Tailleferre. I’ve already shared tales of the two highlighted members of Les Six. And I’ve recently read an entertaining book that celebrates them all: The Ox on the Roof: Scenes from musical life in Paris in the twenties. 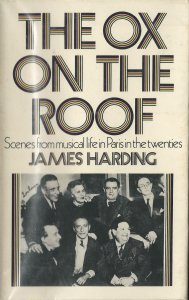 Harding’s book gets its title from the name of a Parisian cabaret, albeit indirectly. Milhaud was in Brazil 1917 – 1919, and among the popular Brazilian music inspiring him was a ditty, O Boi no Telhado. Upon returning to France, he translated the Portuguese into le Boeuf sur le Toit, The Ox on the Roof, his ballet making its premiere in 1920.

The ballet’s popularity with the avant garde crowd prompted establishment of a Parisian cabaret of the same name. Though it has changed location five times since then, Le Boeuf sur le Toit still exists. Today it’s a fashionable jazz club with an Art Deco setting just off the Champs Élysées.

In a sense, the group might well have been called Les Sept, because just about any mention of the six also includes the era’s cultural polymath, Jean Cocteau, who recurs in The Ox on the Roof as well. Here are a few tidbits from Harding’s book on all seven. 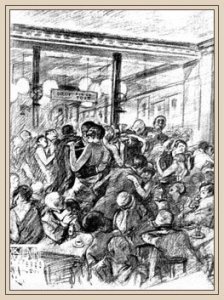 On the cabaret itself in the 1920s: “The ox presided over the breakdown in social conventions brought on by the war. Its glassy eye watched unmoved the spectacle of women smoking cigarettes in public and of the arts invaded by anarchy.” 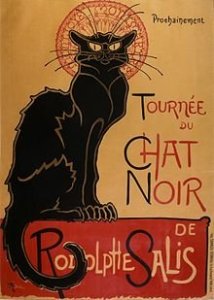 An earlier Paris cabaret was Chat Noir, considered to be the first of such establishments, which Harding notes “specialized in topical songs of a higher quality than most.” Rodolphe Salis, its founder, dressed the club’s waiters in ceremonial garb of the country’s austere Académie Française. Once, Britain’s Prince of Wales, later Edward VII, visited incognito. Recognizing him, Salis said, “Your Highness, what an honor… for myself… for my colleagues… for the Chat Noir. And how’s your Mum, then?” 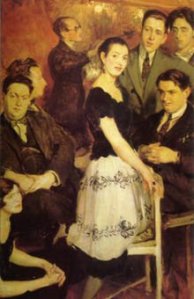 On evolving mores of the era, Harding notes, “Whatever the faults attributed to the Six, morality, it is pleasant to report, was never one of their interests, just as it is a topic which French music as a whole has always avoided with refreshing grace.”

French composer Eric Satie was, in a sense, godfather of Les Six, and his ballet Parade was characteristic of the era’s avant garde. Parade was staged by Sergie Diaghilev with sets and costumes by Pablo Picasso. Its Paris debut in 1919 caused an uproar. Reports Harding, “Top hats were crushed and walking sticks brandished. A lady screamed the supreme insult: ‘Opium smokers!’ An indignant matron hissed: ‘If I’d known it was so silly I’d have brought the children.’ ” 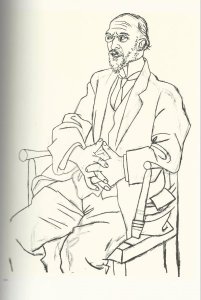 A critic responded; Satie retorted with “a message whose crudity was all the more glaring in that the script was exquisite.” The critic dragged Cocteau, who wrote the scenario for Parade, and Satie into court. The judge, apparently unmoved by avant garde sentiments, gave Satie a week in stir, a fine of a hundred francs and awarded a thousand-francs damage to the critic. 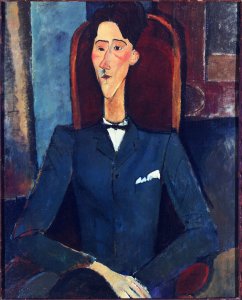 Cocteau responded by physically attacking the critic’s lawyer. Then the cops grabbed Cocteau and, according to Harding, “tumbled him downstairs to a cell, and there beat him up with that vigorous devotion to their work for which the Paris constabulary is noted.”