ON THE VIRTUES OF (HIGHLY SELECTIVE) CONNECTIVITY

WE LIVE in a highly connected world. (Otherwise, of course, SimanaitisSays wouldn’t exist.) But a couple of happenings suggest we have reached a tipping point. The two I have in mind are the overabundance of connectivity and the monetary unit of bitcoin. The combination of these two scare the hell out of me.

Connectivity occurs at all levels, all the way from governmental and corporate interactions to individual use of electronic gizmos—including the cars we drive. No doubt you’re heard about the Wired article on remote hacker intrusion of a stock Jeep Cherokee. Two electronic specialists had warned automakers this was possible, earlier demonstrated its feasibility from the back seat, and have now taken remote control of a car from afar.

Briefly, a car’s connectivity with its larger environment is the portal to this hacking. In the Jeep’s case, it’s the car’s UConnect infotainment system. Once virtually on-board in the electronic sense, the hacker can exploit a lack of firewalls among the car’s core electronic controls.

ABS, for instance, is designed to release a brake selectively as part of its function. An Electronic Control Unit handles the engine’s operation, including revs and shutdown. If fitted, an electronic lane guidance device has input to the car’s steering.

Two important points: The connectivity portal is key to a hacker’s reaching the car remotely. What’s more, if there’s no electronic control of a particular automotive function, then there’s no hacking potential, even without a firewall.

My 1990 Mazda Miata’s ECU might be hacked from a nearby signal, but it has no link to its larger environment other than a traditional car stereo. Thus far, I believe it’s safe. I’m less confident about the cell-phone link and SiriusXM of my Honda Crosstour. 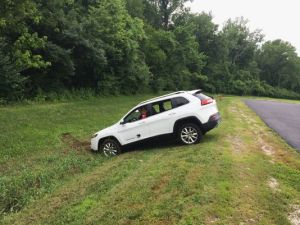 A much circulated photo of a Cherokee in a ditch has been accompanied by the implication that hacking the car’s engine, brakes and steering could cause such havoc. However, a Wired video shows how the Cherokee actually got there: Its ABS brakes were hacked during straight-line coasting at low speed in a parking lot (real estate not seen to the right of the published image). No less disconcerting for the driver, I admit.

In any case, firewall protection of electronic gizmos would seem to defeat hacker intrusion. And, ironically, a car’s connectivity with automakers could get computer updates correcting the problem out there efficiently.

However, I’m still scared—and here’s why: We all have relatively unprotected connectivity in myriad ways, the Internet as a fundamental example. And those intent on disruption for economic gain can use the bitcoin as a medium of extortion. Briefly, a bitcoin transaction is an anonymous payment using open-source Internet protocol. It’s untraceable virtual cash.

A bitcoin document per se is unimportant; only its untraceable electronic data need be exchanged.

Suppose you’re hacked by a cyberterrorist demanding ransom for return of your computer’s full operation. Hitherto, any ransom payment by credit card offered (perhaps, alas, only theoretical) means of tracing the cyberterrorist. Now, though, the anonymity of a bitcoin transaction offers a whole new scenario.

Combine bitcoin ransom with portals made possible by everything being linked to everything else, and it’s scary indeed. Then people wonder why I’m such a Luddite. ds

This entry was posted on August 1, 2015 by simanaitissays in Driving it Today, Sci-Tech and tagged automotive hacking, bitcoin extortion, connectivity hacking.